Create a table column by column with special border formatting

I need to create some tables for a special college report. The data provided specifies the values column by column.

The user Andrew Swann pointed out, that there is a way to create TeX tables column by column which was completeley new to me, but would be a great benefit for my special purpose.

Unfortunately I neither understand those commands nor didn't find a good documentation for that. What I need is a table with borders around each single cell except for the first cell and the whole last row. Below is an example how it would look like using the regular syntax.

Could you please tell me how I can create such a table by building it columnwise?

The macros \halign and \valign are documented in the TeXbook. More accurately \halign is described in detail there, and \valign is introduced briefly, saying that is analogous.

The \valign statement starts with a preamble than has the form

the table material is for the given column is inserted in place of the #'s much as in macros. A short cut is that an extra & at the beginning or immediately after another &, means that the format material from that point up to the \cr is repeated for all subsequent rows. Thus a preamble

produces an arbitrary number of rows with the same format.

In the table you add entries in the usual way; rows separated by &, column ending with \cr. A complete column format specification can be replaced by other material via \noalign{...}; so \noalign{\vrule} produces a vertical rule the whole way down the table. A single row is replaced by writing \omit<...> where <...> is the new material. The analogue of \multicolumn is \multispan, thus \multispan3<...> will spread <...> over three rows.

Here is your example: 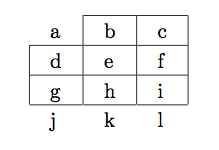 \leaders\vrule\vfil is what \vrulefill ought to be, but the command happens not to be defined, this is used in combination with \multispan to draw the vertical rules over the appropriate rows.

When we use \omit for the box containing a we have to provided the relevant parts of the formatting that we still need. The extra .4pt on the \vskip accounts for the thickness of the \hrule.

An alternative approach to the whole table would be to provide separate rows for the rules, but then this essentially doubles the number of &s we have to write.

stackengine package builds stacks vertically. I EDITED the answer to make sure it works with changes in \fboxsep and \fboxrule. Two examples shown below. A further EDIT allows for cell content to be of variable width. There are five parameters you can adjust, fboxrule, \fboxsep, \mystrutheight, \mystrutdepth, and \horzbuffer. The last of these is the horizontal gap added to the cell width. 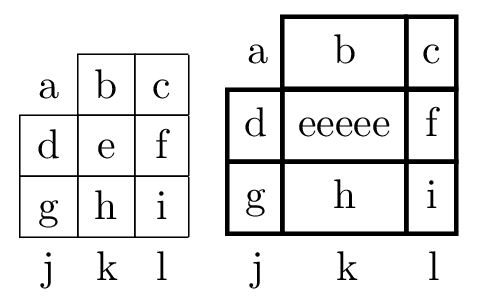 Not the answer you're looking for? Browse other questions tagged tables or ask your own question.

6
How to create table column wise in LaTeX?
7
Fill table with dynamic amount of columns
2
Creating a list of 'stacks' leads to 'Argument of \@firstoftwo has an extra }'

8
Passing the current column width to a macro (for table headers)
2
What does it mean to be a cell based table without being vertically merged?
1
Formatting table to have column width in twocolumn article
4
Horizontal lines in nested tabular environment
6
How to create table column wise in LaTeX?
3
Simpler solution of "Table cell color overlaps cell border"?
0
Table Column Box Headings: Center Horizontally and Vertically
3
Enumeration in a table, with top-aligend column
0
Table with an extra column (comments) without horizontal line-layout