(Please ignore the node styles, I've sorted that part, it's the edges I'm struggling with!)

My diagrams can have undirected edges that join arbitrary sets of nodes together; I use small perpendicular marks to distinguish different edges. So for example, the rightmost edge above is a single edge with two source nodes and a single target, and the two edges to its left are distinct.

I realise number 2 is quite vague, since I haven't specified precisely what I want, but I hope someone can point me in the right direction!

My (very) poor attempt so far is as follows: 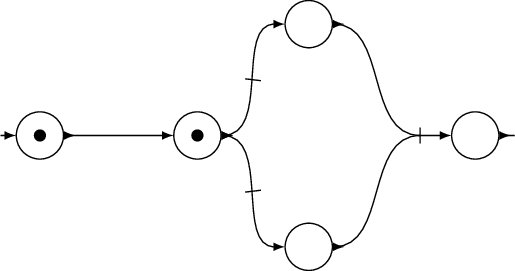 5
TikZ: placing a line (transformed into a sinusoidal shape) parallel to an edge connecting nodes
14
Natural transformation arrow with TikZ
7
Draw edge on arc
3
Adding extra nodes at anchors of rectangular node custom shape in tikz?
3
Adjusting edge alignment and positioning of fitted node
6
TikZ graphs: Specify edge target anchor
5
Tikz, graphdrawing: How to use \foreach variables to set edge node labels?
5
Drawing a Decision Diagram with Tikz and layout manager
1
How to make tikz mindmap that where the second node and the first node are connnected horizontally, not vertically
1
How do I make a multiedge/tree-edge from a node to a box in latex-tikz?