I would like to have a \frac or mathpartir-style inference rule with a dotted rather than solid line, so that I can put fractions into inference rules without overloading horizontal bar.

The following example shows three possible steps towards this (ordered by increasing closeness to solution):

Here are my attempts; I tried two different ways of customising inferrule.

There is some discussion here but the proposed solution is to use dashundergaps. Since the width and vertical positioning of the dotted line are incorrect when compared with the behaviour of \frac, this cannot really be considered a solution.

Using mathpartir and customising inferrule seems like the simplest direction to explore, but the results are somewhat unpredictable. The first attempt above doesn't space out the dots properly; the second does, but changes the vertical placement of the line (so that the superscripted 'beta' character now intersects with the bar).

This may also be relevant.

Here is my attempt, which uses \ooalign and \genfrac in the definition:

Now with \mathchoice for different size!

One can typeset a fraction without bar and superimpose a dashed bar to it:

A First approach could be: 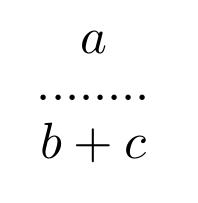 Not the answer you're looking for? Browse other questions tagged formatting fractions or ask your own question.