How can I get get makeindex to ignore capital letters?

However the \MakeLowercase command does not appear to work as words which appear at the beginning of the sentence are sent to the .idx file with the capital letter in place. This then affects the sort order of the index as the capitalised words come first. Here's a minimal worked example

And here is a screenshot 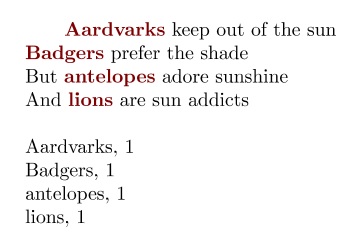 The problem is that we have two A-Z lists, one for words which begin with uppercase letters, and one for words which begin with lowercase letters. Can anyone make changes to the macro to force the argument #1 into lowercase before sending it to the .idx file? Alternatively is there a way to get makeindex to ignore capital letters during sorting? Ta.

(NB there's a thread Applying \lowercase to index entries which deals partly with this issue. However, the solution is a macro containing two arguments. I'm trying to both highlight and add to the index using only one argument, and I haven't been able to adapt this code)

Are you also concerned about singular/plural use? For example, it would be more usual to have a single index entry for lion rather than separate index entries for lion and lions? Here's a possible way of adjusting for singular/plural/uppercase/lowercase: 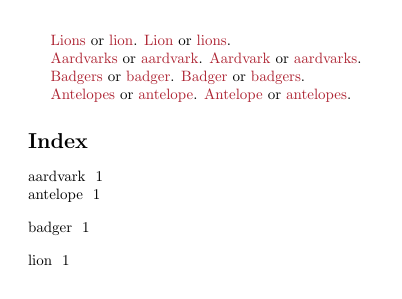 The makeindex call is now

where the document is called test.tex. Alteratively, you can just do makeglossaries test.