I'm trying to make a diagram similar to this (from wikipedia)

Except that I want to the double arrow $\eta$ two be pointing from node $B$ toward the middle of arrow $X$ (it is, after all, a natural transformation from $RF$ to $X$).

I'm trying to use the \xtwocell command of the 2cell package for xy. In subsection 3 (Excursions) of section 25.4 (extra options) of chapter 25 (two-cell) on page 47 of the xyrefer manual, it is stated

\xtwocell[⟨hop⟩]{⟨displace⟩}... connects to the ⟨pos⟩ displaced by ⟨displace⟩ from the relative cell location specified by ⟨hop⟩. The displacement can be any string of valid XY-pic commands, but they must be enclosed within a group {...}. When the cell location is the target, a null grouping {} must be given. When used with the <\omit> nudge, such excursions allow a labelled Arrow to be placed anywhere within an XY-pic diagram; furthermore the Arrow can be oriented to point in any direction.

Of course the manual gives no examples and makes no further comment about how to change the orientation of the Arrow (in this manual, capitalized "Arrow" refers to the double arrow between arrows, i.e. the 2-cell).

What does he mean by "any string of valid XY-pic commands"? What may the displacement argument for \xtwocell be? Any experiments I tried (eg <1>,dr,[0,1]) typing in the curly braces just ended up in the $A$ node text, so not being interpreted as a displacement or position or orientation. How do I change the orientation of the Arrow? How do I achieve the "orientation in any direction" that was promised me?

Here is my simple markup

which gives the following image 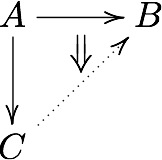 I want to change the direction that double arrow is pointing, point it to the corner object $C$, or reverse it. I can shift it by changing the number in \omit{<2>}, but how to change the orientation?

(Google showed me that the same question is asked here on the xy mailing list, but never answered)

See also my question at Label the source/target object in the middle of compositemaps from 2cell package of xy? for another attempted method at this diagram.

If you would consider using tikz-cd, this can easily be achieved with

The argument of \arrow that usually denotes the direction/target node will be ignored.

For a shorter arrow I’d use the short style from my answer to your other question Label the source/target object in the middle of compositemaps from 2cell package of xy? 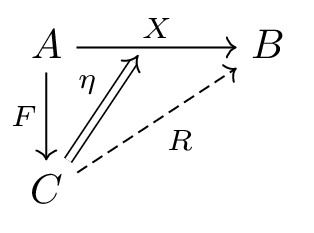 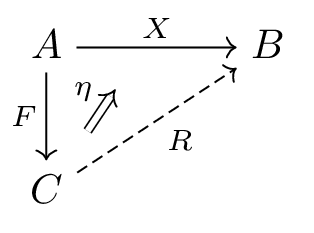 This is the solution that I would use in xypic, I believe that the command you are looking for is to write ^ before the name of the 2-cell, and also before the <2> that moves it to the right. So this will give you the same image:

Now to get the "correct" direction, is not so easy with xypic, you might have to add more (empty) rows and columns, so you have where to point at. Here are two failed attempts adding an extra row and an extra column. And a succesfull attempt adding two extra rows and two extra columns more.

And this is how they look in order.

There are more ways to draw triangles in xypic, here I leave some examples that I use. Hope they are useful.

And how they look,

Not the answer you're looking for? Browse other questions tagged diagrams arrows xy-pic or ask your own question.

1
Label the source/target object in the middle of compositemaps from 2cell package of xy?

2
Moving the position of an arrow in XY-pic
7
How to redraw a previous arrow?
7
Odd behaviour with arrows and multipart rectangles
1
Label the source/target object in the middle of compositemaps from 2cell package of xy?
1
Make all arrow lengths the same in xypic
4
Squiggly Double-Lined Left-Right-Arrow (i.e. "approximate equivalence")
1
How can you change te arrow tip 'style'