How do I create a description list where the item text is automatically indented to the width of the widest label?

This is the same question as Description list with aligned descriptions but I would like the width of the widest label to be automatically calculated. 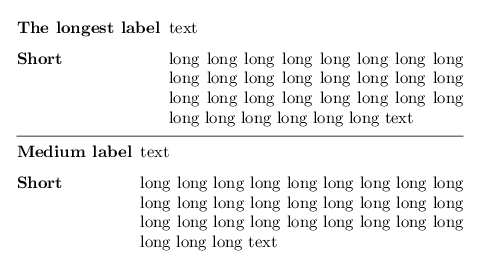 to be produced by the following input:

Here is a solution that uses the eqparbox package to measure item label widths. It avoids some of the limitations of the solution described in Gonzalo Medina's answer (see the bottom of this post) because it doesn't typeset the entire list twice. The trade-off is that it requires an additional compilation run because widths measured during one run will only become available for the next one.

You can declare a version of the description environment that does what you want by adding the following lines to your preamble. (Only works for enumitem v3.7+, see below.)

What this does is put the description item labels in in \eqmakeboxes so that their widths are written to the aux file. From the second run onwards, all such boxes in the same list will be given the same width (largest among them) and this width will be used as the list's labelwidth.

If you're using a version of enumitem that is older than v3.7 (which was released on 2019-01-04), you can still make this work by adding the following lines:

(N.B. Using the before key for this wouldn't work because the code would be run too late.)

Application to your MWE

Here is my solution applied to your MWE (version for enumitem v3.7+). 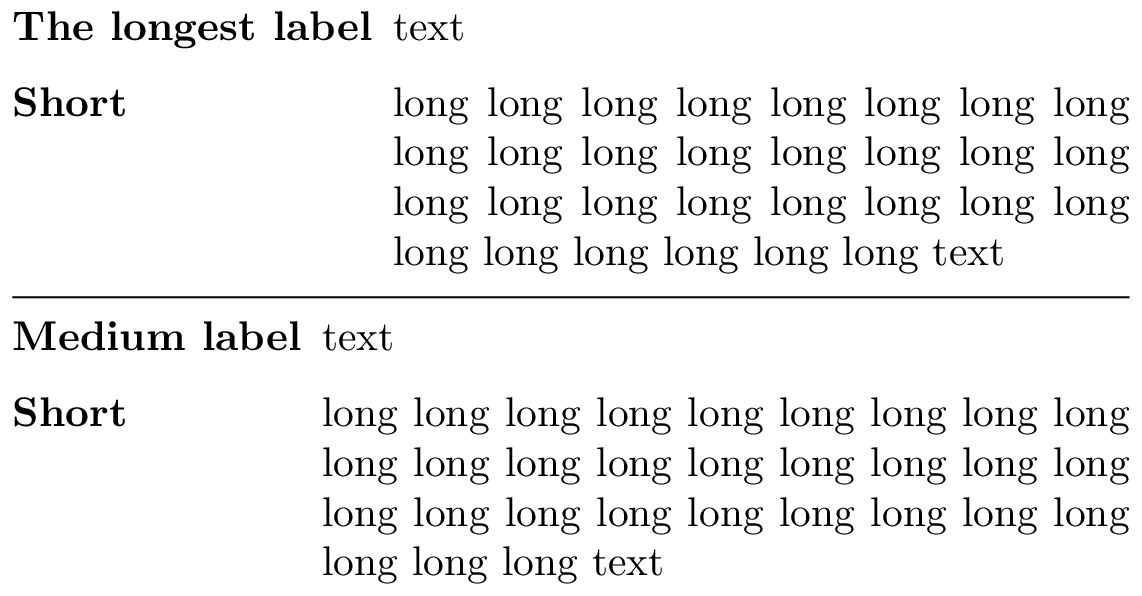 Comparison to the other solution

Gonzalo Medina's answer will work well in most circumstances, but it's a bit heavy-handed and has a few limitations:

Downsides of my answer:

A variation on egreg's answer to Working with margins 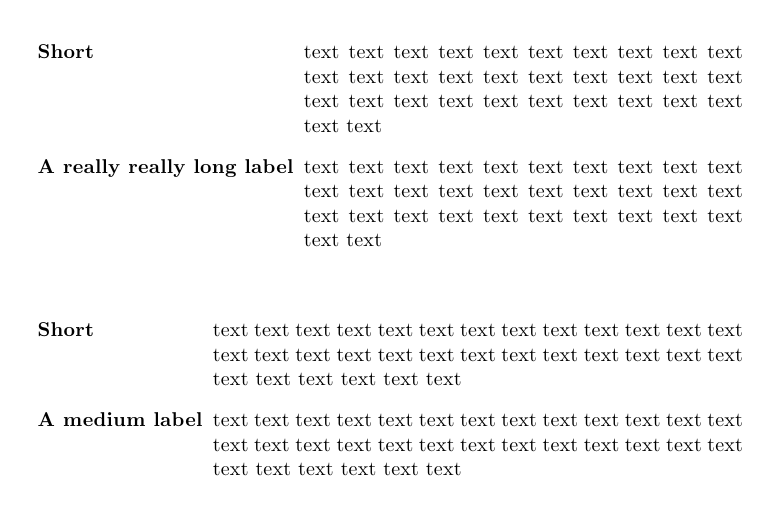 In the first part, the width of the longest label is calculated: initially, \widest is set to 0pt; for each \item, the length of its optional argument is measured and the length stored in \@tempdima; if \@tempdima is greater than \widest, (this is always true for the first \item) then \widest is updated to be \@tempdima. This is done for all \items; \BODY is set inside a box that is never used. Then, a description environment is used, setting \labelwidth to the previously calculated value for \widest.

Not the answer you're looking for? Browse other questions tagged lists indentation enumitem description or ask your own question.

0
Label and indentation format for list
50
Description list with aligned descriptions
13
Verbatim in environ’s \BODY
8
Working with margins
8
Make the lines of a description item line up
5
Indented paragraph after word on same line
10
How to implement common layouts instead of misusing tabular environments?
8
Why do I get an "Incomplete \ifx" in this MWE?
8
Why conflict between mathtools and Gonzalo's solution for auto-adjusting description environment?
4
"Nestable" description environment that automatically finds the widest label width at each level?
See more linked questions