(1st response -- copied from by moderator)

Many thanks for the help.

Yes, I should have said "heavier" fonts instead of "darker" fonts.

The fonts I am using are just the standard Computer Modern as in Knuth's 'The TeXBook' except occasionally I get a symbol from an AMS collection of symbols. I also occasionally make use of the Euler fonts from the AMS for math symbols.

My screen preview program is YAP, and it has an option to make the fonts on the screen heavier. That option saves me.

If Adobe's Acrobat had an option like that, then I would not have asked this question or be concerned about fonts.

For printing on paper, I use an old HP 4p 600 dot per inch laser printer: On paper, the characters ('glyphs'?) from TeX are reasonably heavy.

The main problem is that when using the program DVIPDFM.EXE to convert TeX dvi output to PDF, the characters are not heavy enough as displayed on my screen by Adobe's Acrobat reader. So, Acrobat could use a darker option like YAP has.

I looked at 'A Survey of Free Math Fonts for TeX and LaTeX' by Steven J. Hartke at

and on page 3 saw the footnote:

That paragraph explains well what I am seeing and the cause of the problem I'm trying to solve.

That is, my question was not really asking to change from the Computer Modern fonts in TeX but to change how these fonts are displayed when converted to PDF and viewed with Acrobat. That is, it would appear that I could just leave everything about TeX alone, get DVI files as at present, and just have DVIPDFM.EXE use slightly heavier Adobe Type 1 fonts for what TeX is using.

So, that's where I am: Just TeX, just the standard TeX fonts, just the old ProTeX 1.2, YAP for screen preview, fonts heavy enough when printed on paper, but as in Hartke's footnote fonts too light as the Adobe Type 1 versions are displayed on a computer screen with Adobe Acrobat.

Maybe a solution could be obtained just by adjusting some 'hints' or some such in the Adobe Type 1 definitions?

From Hartke's footnote, it appears that my problem is from common up to nearly universal: Any font will look lighter on a computer screen in Acrobat than on 600 dot per inch paper. So, there should be enough interest for a solution.

(2nd response -- copied from by moderator)

The responses were good and showed a lot of effort.

It was time for me to respond.

From the reference in your response, I extracted a quote that showed that the problem I was trying to solve will have to be nearly universal among users of TeX and LaTeX.

While you did not like my response, in fact I responded in the only way permitted by the software at the Web site. In particular, your:

"The space below each answer is for comments on those answers."

does not correspond to anything I see on my screen from my recent copies of Internet Explorer and Firefox.

For the question, net, I don't really need to change fonts in TeX and, instead, just change the Adobe Type 1 versions of the standard TeX fonts and used by Acrobat. That actually was essentially the way my question was stated.

For my response, I responded as needed the only way permitted on the Web site.

But you or someone voted down my careful, clear, illuminating response thanking everyone.

So, in this response I will omit a "Thank you". And I will minimize my use of Stack Exchange in the future.

Try looking through the LaTeX Font Catalogue. For example, Bitstream charter and palatino are both thicker than the default computer modern.

For example, to use a palatino font you could add the following to your preamble:

mathdesign provides some good fonts, but awkwardly they are incompatible with some ams packages. (They do provide alternatives though, so they might be an option).

Or you could try \usepackage{fouriernc} as Leo Liu suggested in the comments.

Here's another way to get a really thick font for text and maths.

This uses Computer Modern Fibonacci and the mathastext package to make it use the text font for basic maths. The problem with this approach is that it might make the maths symbols (\sum etc) look rather thin in comparison... 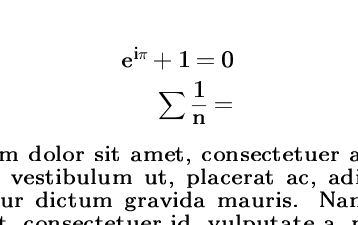 You might try “A Survey of Free Math Fonts for TeX and LaTeX” by Steven J. Hartke to see what's out there.

If you don't want to change from computer modern (and restricting the discussion to type 1 fonts), then there are a few choices. For traditional OT1 computer modern, there is the Y&Y/Bluesky version, and there is the Bakoma version. The bluesky version is considered much better, and nearly all distributions use it by default now (in the past it was not freely available). For T1 encoding (\usepackage[T1]{fontenc}), there is CM-super and Latin modern (\usepackage{lmodern}). Latin Modern is generally considered superior (but see this question). These 4 versions of computer modern-based fonts are not specifically designed to have different weights (it's not like one is 'book' another 'regular' and another 'demibold'), but some are indeed a little heavier than others. You could try all 4 and see which you prefer.

To check which fonts you are using, in Adobe Reader: open the document properties dialog, and look on the Fonts tab (I'm not sure how you can distinguish bluesky from bakoma -- I vaguely remember that one will show up in uppercase (eg 'CMR10' and another lowercase 'cmr10') but I may be getting confused here.

9
Bold Typewriter Type fonts
7
How do I switch between Vector and Raster (bitmap) Fonts?
11
Using TeX fonts in HTML documents?
21
It is possible to make fonts appear heavier (darker) in pdf output of Latex?
8
Creating Mathematics PDF
5
How to obtain a heavier math font?
3
PDFs are not printed with the correct fonts
1
Using scalable fonts with LaTeX
2
Type 3 fonts in output PDF file