I've tried to modify a previous suggestion that would display abbreviated citations only after they had be cited once. This unfortunately didn't work -- the reference number appears instead of any citation at all: 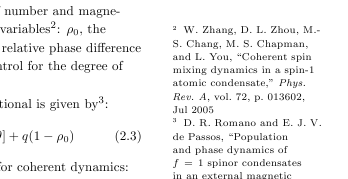 As you can see it gets very busy very quickly. Some pages the margin is all citations!

I've searched everywhere for this and tried editing solutions to similar requests -- alas! No luck. Any help or advice would be greatly appreciated.

Your MWE is not compilable, but you can try the following: Use biblatex instead of bibtex. You can find the explanation how to do that here. Then, you can take advantage of biblatex's large set of options. Put

in the preamble to not show the title in the margin. However, the bibliography will still show it.

clears the url as well and so on. Biblatex even allows different citation and bibliography styles. I strongly recommend it with tufte-latex.

Not the answer you're looking for? Browse other questions tagged bibliographies tufte or ask your own question.

10
Can I automatically generate abbreviated citations in Tufte documents after the first occurrence?