Having defined a title by

how can I later add something to the title? The simple assumption

obviously does not work due to recursion. I managed to get a version working using \expandafter with only the full title:

But so far I haven't found out how to also include the short title in this. Also, adding something before \inserttile does not seem to work either, only after inserttitle.

In our group, we are required to use a given beamer class for presentations. Unfortunately. the vertical placement of the title is bad for titles that use two lines. As we cannot modify the beamer class itself, we use a slightly dirty hack to move the title into an appropriate position with a vspace.

I would like to automate this hack and make it transparent to the other users. So far, I have come up with the following solution that can be included at the beginning of a presentation (as a package for example):

At the beginning of the beamer presentation, the macro \ITI@computeheight is expanded and computes an offset height \ITI@titleheight. I have left out the details of the macro as they are not important. Then, \title is redefined, basically only a \vspace command is added to the previous title.

My current problem is that with the redefinition of the title, the short title gets lost. And I have no clue how to correctly use \expandafter or other commands to make it work.

The following code works when using a predefined short title (1 in this case):

But when actually using \insertshorttitle, Latex gets into an infinite loop as it wants to expand the new short title over and over again:

The title is stored in \inserttitle, whereas the shorttitle is saved in \beamer@shorttitle. Thus to redefine these two entities you can directly redefine those commands: 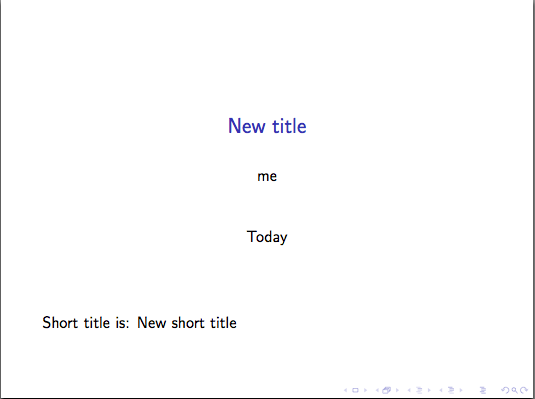 If you wish to use the old title definitions in the new ones you can either use \xdef:

Not the answer you're looking for? Browse other questions tagged macros recursion or ask your own question.

4
Recursion - splitting a group.
4
TikZ - bad positioning of images drawn by macro
9
How can I collect the contents of a LaTeX environment in a macro without the grouping?
5
Macro with local variables expanding over several tab-points
6
How to define a newcommand that expands into another newcommand
5
Define macro for sequence/list/tuple macros
5
Trying to eliminate stack overflow during recursion
4
Infinite recursion with \tl_map_variable:nNn
7
Simple recursion in LaTeX