Some fonts in standard latex distributions are supplied in LY1 encoding, so the letters ąę, śćńźŚĆŃŹ are constructed in situ with unproper kerning. I had raised a question for solution and a few examples of manual kerning were given in this thread: berenis and 'ę' 'ą' letters . However I've contacted also with a creator of the font. He answered me with an image of the font editor: 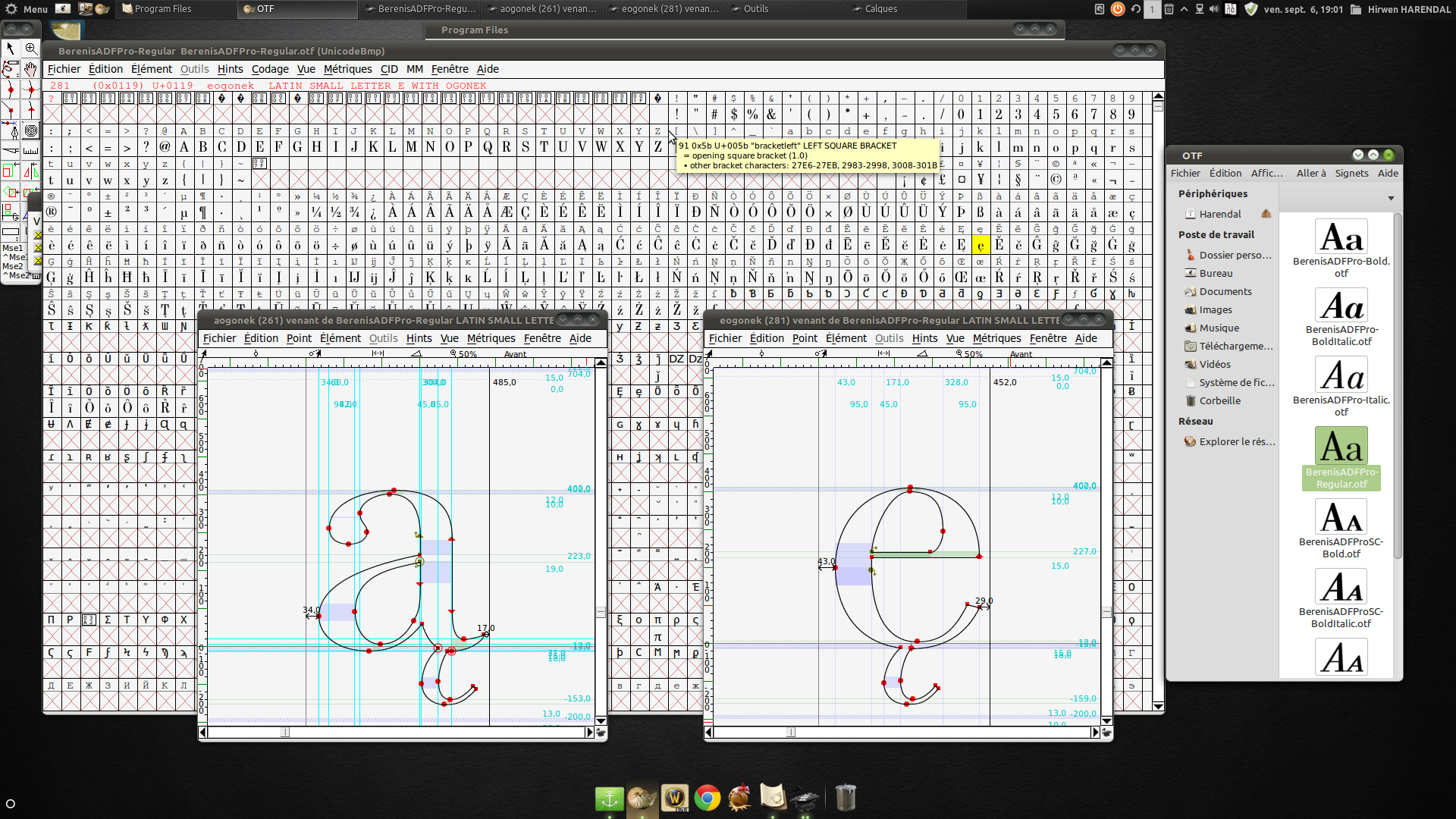 demonstrating that it does contain ę and ą letters included in the otf file. He suggested that there might be an encoding solution. The manual hacks work, but they demand a lot of manual adjustment. So I wonder how to transcode letters so that they would be properly taken from the file and not constructed. Maybe we can transcode the font to some other encoding or create some translation table?

I am the author of the LaTeX support package.

Adding support for another encoding isn't a problem. I suspect I didn't originally because I didn't know whether anybody (else) would be interested in actually using the font or, if they did, whether they would need characters not in LY1. (LY1 has the advantage over T1 of free slots which can be used to accommodate the additional ligatures in this font. I suspect this is why I used LY1 rather than T1 in this case.)

Could somebody confirm the best encoding to support Polish since I'm entirely unfamiliar with the language. Will T1 do it? If so, I can create support files for T1. These will not enable access to any additional ligatures or alternate characters included in BerenisADF so please also confirm that this would be useful despite that limitation.

I'd like to know this will definitely get used as it means updating a bunch of stuff to work on a different OS than I was using when I originally created the package. I don't mind doing this if somebody wants it but I don't want to waste my time if nobody will use it!

Update: See my other answer below as package now supports T1. I inadvertently created a second answer so apologies for the confusion. (I don't know how to merge them, which would be ideal but that's probably not possible.)

EDIT: I guess that answer got deleted. Better not say any more since I don't understand why that post got deleted rather than this one. Note this isn't a complaint - I just don't have a good enough sense of how the site works.

EDIT: I think maybe that answer just got deleted simply because it was a second answer rather than because of its content. Somebody please say if not. Here's an updated version of what I said:

UPDATED PACKAGE: A new package is now on CTAN and is in the current TeX Live tree, at least. I asked if somebody could test it who knows what it should look like (i.e. who typesets Polish), somebody very kindly did so, and so I believe that it works OK.

To use T1/TS1, you need to pass enc=t1 to the package and not pass lig or lig=true afterwards. (Passing the lig option will switch to LY1 since I can't get the fancy stuff to work for T1 due to lack of free slots in the encoding.)

I recommend that Welsh be typeset in the default LY1 encoding, which now supports Ŷ, ŷ, Ŵ and ŵ without enabling the swash variants by default. (But I had to lose some extra ligatures to do this so ft, fft and tt now only work with the swash styles.)

If ligatures are missing from T1, let me know. I think I caught them all but it is hard to be sure as I did that bit by hand. (I am not fond of autoinst. That is, I think it is great if you need a quick fix but it is inevitably a somewhat generic solution. I'm not sure how I generated the lig file for LY1 although I may have done some of it by hand as well.)