Tracing group-level and position in LuaTeX

I am absolutely new to LuaTeX and I have few questions about it. First of all I learned that in LuaTeX it is possible to trace all TeX tokens with `token filter' callback. Is it possible to get some additional information in callback functions like current positions in input file and current group-level. What I am achieving to do is to write callback function which looks like:

Yes, all these items are available from inside the token_filter callback. Some of them, however, require a bit of preparation.

To address the individual parts of your question:

Here is a demo that combines all of the above: https://gist.github.com/phi-gamma/6745931 . The result is a table with information about collected tokens: 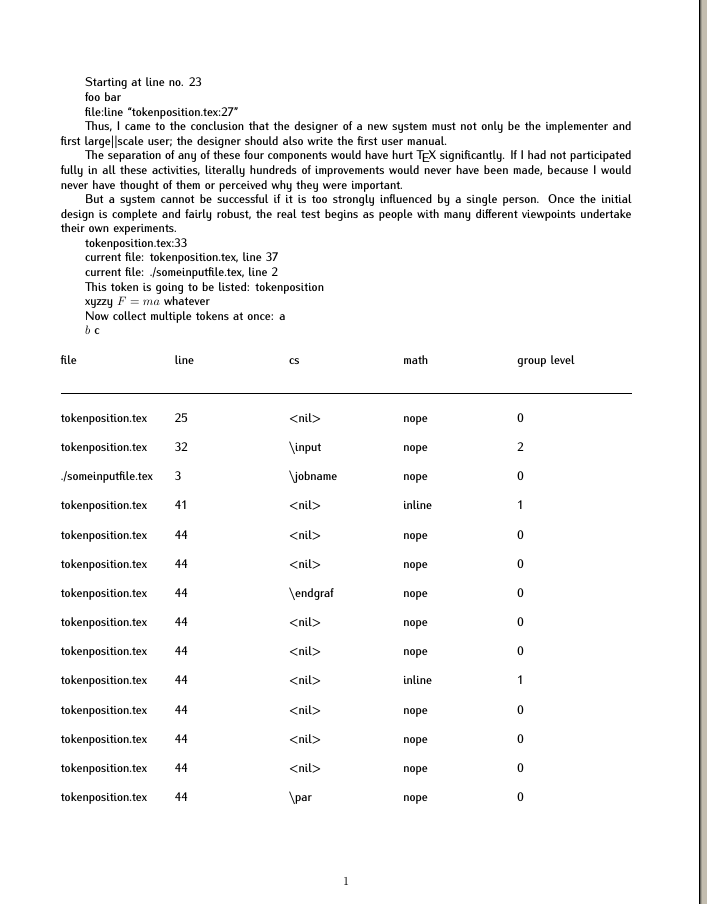 Lines of the main file will be counted starting with the line where \enabletokenpos occurs. It takes one mandatory argument, namely the the current line number. To my knowledge the input line at that point cannot be automatically determined except by using a separate initialization script which would be outside the scope of the question at hand.

Then there are macros for accessing the current state:

Obviously, the callbacks must be in place for them to work.

Tracing is controlled though these macros:

Caution when using the environment: due to multi-level expansion it will blow up the resulting table pretty quick. It is smart enough to not include itself, though.

Finally, in order to output the content of the token collection you need another macro:

It builds a simple table and prints it in the document.

Tracking files is restricted to input (i.e. TeX) files. Other files touched during a TeX rund -- Lua code, bitmaps, encodings, and the likes -- are unaffected. The table file_stack helps keeping track of the line numbers inside individual files. Both the process_input_buffer and the open_read_file callback are used. This is necessary in order to achieve a correct line count since the current implementation allows for the Lua code to be loaded while the document is being processed. As mentioned above, it should be possible to avoid this by using an initialization script to install the open_read_line filter before the main input is opened.

The function that is hooked into the token_filter comes in two variants: grabtoken() will consume a single token, add it to the collection, and remove itself from the callback. grabtokens() (plural) is basically the same function, but it will remain in place until it disabled by calling stopcollecting(). As a goodie, it will refrain from collecting any token after it encounters the control sequence \stopcollecttokens lest we pollute the collection with unwanted items.

Tokens are added as a table with the following keys:

Not the answer you're looking for? Browse other questions tagged tex-core luatex or ask your own question.

7
How do I tell a node about LuaTeX's state of mind when it made it?

17
How to read a stream of tokens up to one of two different delimiters
12
Accessing to .log messages from LuaTeX. Is it possible?
17
Why do user-defined whatsit nodes affect LuaTeX pagebreaking?
8
Namespace in luatex
7
How do I tell a node about LuaTeX's state of mind when it made it?
2
Determine group nesting level in lualatex
13
LuaTeX and em dashes