Is there a switch to turn off LaTeX counters from inside a box?

I know that amsmath typesets at least twice its material, the first one for measurement and that it takes measures (sic) to avoid some counters being updated twice.

Is there a switch a macro writer could use to inform LaTeX not to update counters (which are global in LaTeX) when it is needed to typeset some unknown contents #1 inside a box, which will be discarded later?

update from info gathered from egreg's answer and a (belated) look in the sources. It is not as I said above that amsmath avoids for some counters to be updated; it avoids it for all, because it uses a list of all counter names which is kept up-to-date by the latex kernel, and designed to allow anyone using it to do things with all these names. The conclusion is thus that amsmath defines the macro pair \savecounters@/\restorecounters@ because it needs the functionality, but that anyone can copy their definitions (\savecounters@ defines what \restorecounters@ will do) and use them with the same effect without having to load amsmath or even any portion of it. Just replace \@nx by \noexpand.

This is basically what amsmath does for avoiding the problem of stepping counters twice when measuring. The changes to the counters' values should take place during the measuring phase, or there's the risk that a change from one to two digits ruins the measures made.

As you see, #1 is evaluated twice, but the counter is stepped only the right number of times. 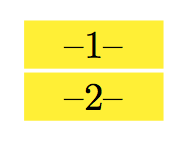 15
Vertically aligning minipages, subfigures, and subtables (not with baseline)
5
How to highlight all inline math in document?

12
Is there a '\ReallyDontExpandUntilTheLastMinute' command?
1
Create a static box in LaTeX
6
My own page number from file {counters}
8
Create a switch from a given macro
2
Example of Box inside Box
1
Missing number? Macro not evaluated (nested-macro)?
8
Latex custom counters
0
Track changes in LaTeX counters' values