do not quite fit; we would not want to have the dash breaking, but we would want to allow hyphenation of "Koordinaten". Of course,

works but has to be specified locally, which we do not want to do either (favoring a global \hyphenation{...} setting).

Is it possible to achieve the above in a form that does not force us to specify hyphenation locally? 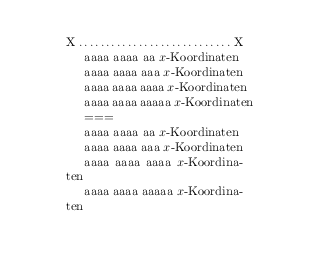 If there is not already a shortcut you can as below, or better as egreg points out in comments

If you find yourself typing this sequence a lot, you may want to create a macro along the following lines:

and type \nbdx Koordinaten in the body of the text.

Then just use ‑ (U+2011) instead of - (U+002D) before the closing parenthesis. This means you can now write (re‑)creation or (Web‑)Frameworks or even Entwicklungs‑, Test/QS‑, Staging‑ oder Produktivsystem (yes, I got dash-comma working).

If this does not work for you, @dessert reports that a combination of this and Dmitry’s answer works:

Which one to use seems to depend on the version of babel you use, and how you use it.

I was looking for this as well, but as a more generic solution, and so far, the answers I found all do not satisfy me. I do have the german Babel package included, but "~ just typeset a double-quote followed by a space for me (and, in fact, I think I prefer double quotes to render as quote characters).

I looked at Unicode, and ‑ U+2011 NON-BREAKING HYPHEN appears to be what I want. Apparently, Xe(La)TeX already supports this, but we use pdflatex (directly in one project, via maven-latex-plugin in another), so that was out.

This pointed me into the correct direction though: I already knew about \newunicodechar so I thought I could just make U+2011 available. My first attempt was…

… to just define it to the hyphen, but it does not work like that. So, after reading some answers here, I tried…

… but \nobreakdash is not known, apparently. Finally, I tried…

… and voilà, I can typeset “(Maschinen‑)Benutzernamen” without the ugly separation and the automatic hyphenation makes this into “(Maschinen-)Benut-⏎zernamen” which is just perfect. Even better, when copy/pasting from the PDF, you get an actual - U+002D HYPHEN-MINUS, which makes things like \texttt{<!‑‑} to get <!-- (for XML comments) work.

There was a problem though: ‑, would still shove the stray comma onto the next line. The explanation has to do with us still using the - ASCII hyphen-minus in our macro expansion, to which Teχ (un‑)helpfully adds a discretionary break. However, this can be worked around if the current font has a T1 encoding (and not just OT1 or LY1), by temporarily switching to the T1 encoding variant of the current font and outputting the named character 127 (0x7F), which is exactly the same as the standard \hyphenchar 45 (0x2D).

For the (custom TrueType) font I was using, this required some hacking due to a ttf2tfm bug; if you just want to make sure that your font’s T1 encoding has the correct glyph at the correct position, use this (and replace museo with your font name):

(Note: I merged my answers to several questions in this answer then copied it to these other questions, so don’t wonder if it shows up in three places.)

Not the answer you're looking for? Browse other questions tagged line-breaking hyphenation babel or ask your own question.

129
How to force LaTeX not to break the line after a hyphen “-”?
40
How to print a warning sign (triangle with exclamation point)?
9
Why does TeX break the line between -- and ,?
4
Hyphenation Problem with german

118
Allow line break, but without inserting a dash
41
How to add global hyphenation rules?
34
In lualatex, hyphenation doesn't seem to work for words that contain certain ligatures
18
How to break long URLs using common hyphenation but adding a line feed indicator?
19
Add hyphenation pattern for word with special characters
5
Wrong hyphenation with \usepackage[croatian]{babel}
3
Allow hyphenation of dashed words & if hyphenated on the dash, add another dash in next line
4
Insert space with babel post-hyphenation
1
Babel Hyphenation