Problems with \textsc for single glyph

Is there a way (simple or otherwise) to import a single character from another font under specific characters, or otherwise alter the character?

I'm using the very attractive Garamond font from here, but there is a slight problem - when using \ae{} with \textsc{}, the font defaults to lower case.

A MWE can be gained by downloading the package from the website mentioned, then using this code:

The result is shown in the following figure (I also did it without Garamond, to be sure it wasn't just a problem with my code). 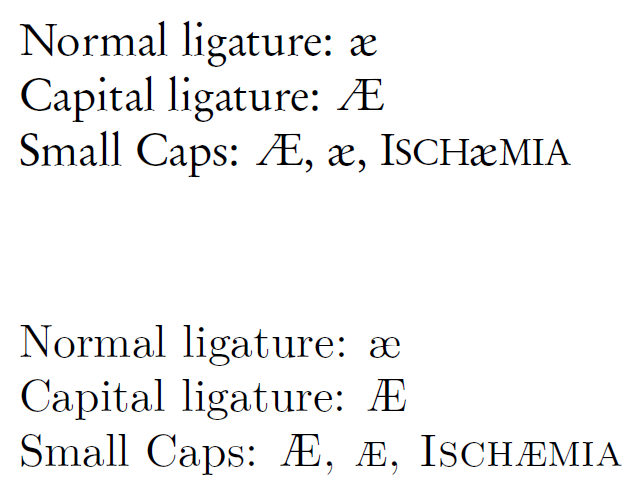 Using the provided font sfd files, FontForge, and most of the instructions given here, I have been able to generate a font that corrects the problem, but it loses most of the hanging fonts and whatnot, or rather it utilises them sporadically.

Does anyone know how to point LaTeX to use a different glyph, either a modified version of the standard capital or the glyph from the self-built version of the font?

The small caps font has only the 26 unaccented letters realized as small caps. So much work would be needed for getting all the characters. If all you need is æ, do the following steps.

What I did is mapping the character to the Æ in reduced size and computing new height and width by scaling at 80% the dimensions of the Æ character. However, trying other characters will fail and need other similar massaging.

Not the answer you're looking for? Browse other questions tagged fonts small-caps or ask your own question.

6
Unicode Replacement Character in Standard TeX
6
Strange output with LuaTeX’s fontloader library
4
How to detect the font currently in use with LuaLaTeX
5
Apostrophe height in small caps with a special font
1
Problems changing the font of section headers in LateX template
3
What is the current status of Kashida (in bidi) with luatex?