Why is LaTeX giving all of my theorems the same number?

Whenever I try to number my theorems according to the section they are in, they all end up having the same number. I tried the other numbering schemes to see what they do, and the only one that gives different numbers is when I point back to the theorem before it.

Here is my code for all three numbering schemes:

This is what that gives me: 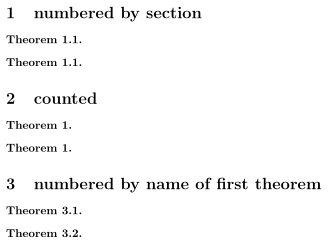 As you can see, in the first two sections, the theorems did not count properly. What should I be doing differently? While the last version works, I would really like to be able to use the other two. Everything I look up says this is how to do it, so I'm not sure what else to try.

So, you found the solution already. If you want different theorem environments to share a counter, use the third numbering scheme. However, why do you define a new theoremstyle for each of your theorems? It suffices to define one for each kind of "theorem-like" environment and use it throughout. For example,

If you want to use the same counter for definitions and theorems, use \newtheorem{theorem}[definition]{Theorem} instead.

Not the answer you're looking for? Browse other questions tagged numbering theorems amsthm or ask your own question.