I have followed the instructions of @Paulo Cereda to configure texlipse (LaTeX in eclipse) to use my batch file when running. But in the process, I have lost forward and inverse search even if the configuration does use my script successfully. QUESTION 1: How do I re-enable searching and still keep my configuration? (I am using the inbuilt viewer pdf4eclipse)

I am using eclipse in windows 7 with MiKTeX 2.9. here is my configuration 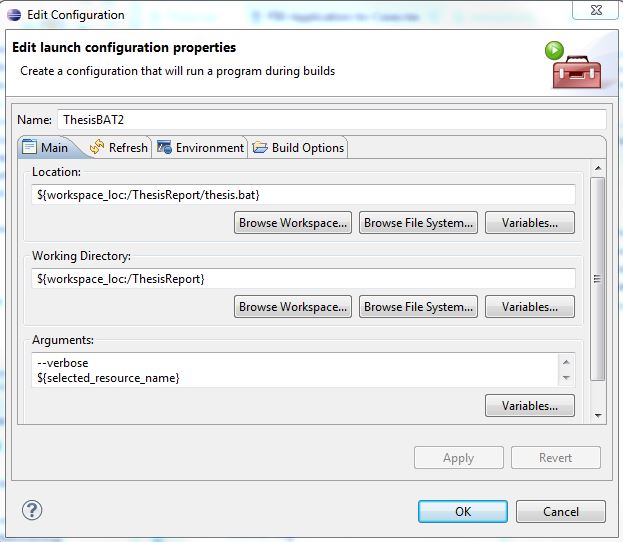 Its been suggested that using arara can work. But I have many files that are \included {} and at some point I loop through them to make a chapter by chapter bibliography as you can see from my script (thesis.bat) the contents of which are also pasted. So I am not sure I know how to implement this.

and adding % arara: bibtex to the top of each \include{file} but i get 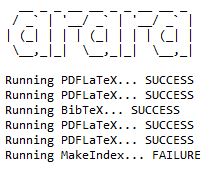 QUESTION 4: What is wrong then? Also, will arara keep my forward and inverse search if i successfuly fix this?

Contents of my batch script: thesis.bat

The simplest solution for me would be the one that lets me keep my script and still have the sync between .tex and pdf

Let me see if I can address your questions. :)

I'm not versed into SyncTeX, so my answer to your first question will be more of a wild guess. For most of the engines, arara offers the synctex parameter to be added to the directive, as you did in your code. But I believe this feature must be enabled in the last engine run, and not the first, since viewers update their display based on the end of the compilation process. When performing subsequent calls to the engine, the SyncTeX metadata is lost. My answer would be along these lines: try to include

as the last part in the compilation chain. If this doesn't work, then we might have some viewer-specific situation outside the scope of arara.

arara doesn't do wildcard searches (long story short: subshell expansion is not allowed), so you have to provide the files you want it to process. When you go with

the rule will run bibtex based on the main file base name + the .aux extension. That's the default behaviour. Virtually, every rule that uses the main file reference supports overriding, done by exploiting the files parameter on their respective directives. If you have

and want arara to run bibtex on each file, you can go with

or by simply providing all the items in this one-liner:

This will make arara expand the bibtex rule to these four files, replacing the main file reference.

Same concept applies to the nomencl rule. If you have

you can use files again, so either

or go ballistic with

and arara will process everything.

What is wrong? Perhaps the directives need rewriting, based on the previous discussion. :) Somewhere in the manual, there's something along the lines of that arara does exactly what you tell it to do. Nothing more and nothing less.

Maybe adding --log to the tool configuration might help you to identify the errors raised from the underlying execution (note that the FAILURE message that arara raised is not from the tool itself, but from the underlying command). This flag generates a file named arara.log in the current directory which contains every single output from every call done in the session.

Well, that's as far as I can abstract from your question. It's quite uncommon here to have intermediate questions within a main question, so I'm lost most of the time when trying to establish which subquestion I'm trying to address. :) Oh well, c'est la vie. :)

I managed to get the auto-refresh back using Texlipse and PDF4Eclipse by checking the following box in the custom build.

Hopefully it can help you.

Also, the synctex should be called in the last time pdflatex is invoked. 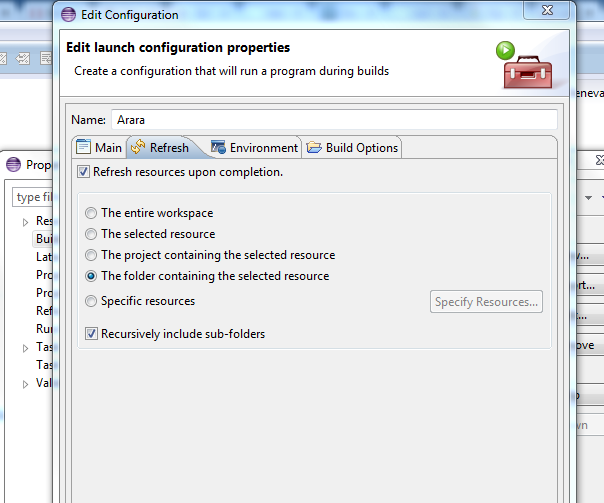 Not the answer you're looking for? Browse other questions tagged forward-inverse-search texlipse eclipse or ask your own question.