I would like to create a graphic with gnuplot for example and import it to latex to implement it in a text. The problem is that its caption, which I created with latex, has a different font, size etc. than the labeling of the axes which were created by gnuplot.

Now I thought I might create an image via gnuplot saved as tikz, so that, when I include it in latex, the labeling's font etc., changes to the standards of the rest of my document in latex. At the end I would like to see a PDF format file which contains my text and the graphic with the same font-/ size etc.

Plotting the von Neumann entropy of a two-level spin system, which was prepared in a state of superposition.

Compile the produced entropy.tex using pdflatex. You now get the correct LaTeX fonts. 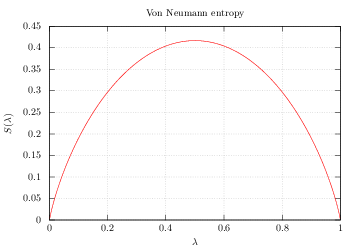 I have been using this python script, which is very easy to use. https://github.com/oso/tikz2pdf

I think the README explains most of the part. Say if you have a tikz file myfig.tikz, you just type in terminal

and a pdf file myfig.pdf will be generated in the same folder. If you want to have the pdf updated once the tikz file is modified, you can use this command:

I only need to change the default viewer to open to use it on a mac, and on a linux machine you can put an alias in your .bashrc

and you are good to go.

Not the answer you're looking for? Browse other questions tagged tikz-pgf graphics or ask your own question.

2
Inserting graph from gnuplot to latex

4
Very plain captions that can be placed in TikZ nodes?
3
Exporting true pdf without dpi
2
how to set the canvas and font size in TikZ?
3
Font-sizes in figures and subfigures
6
How to add a box of a fixed size (width and height) around a graphic of varying sizes?
1
pdfLatex vs Latex>DVI>PS>PDF for EPS, PDF, PNG images (Texstudio)
1
Importing Visio document in latex
0
Creating heatmap tables with headers… Urgent?