I'm trying to produce a command for an equation that may or may not be used inside an align element, and therefore sometimes needs a & next to the = to align the equation. I therefore defined the command \newcommand{\optal}[1][=]{a #1 b} so that when called as simply \optal it outputs the equation, but when called as \optal[&=] I can use the equation inside an align. The problem is that for some reason the command fails; it seems one cannot use & as a parameter. The problem goes away if I make the argument mandatory (ie, \newcommand{\optal}[1]{a #1 b})

Here is the MWE. I'm using Miktex 2.9 and pdflatex.

Am I missing something? Can you think of a workaround?

Protect it with braces

Note that you can add more symbols to the side of an equation. 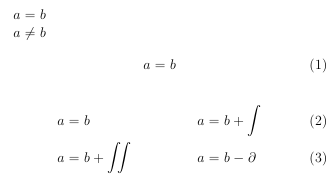 You've found a dark corner in the alignment process. Let's see what happens.

Up to now no unexpandable token has been found, so TeX is still expanding tokens; the expansion of \kernel@ifnextchar starts with \let and now TeX determines that no \omit was present. Then TeX proceeds to build the alignment cell. However, it grabs only everything *up to the next & at the same level, so the contents of the cell is

and no closing ] for the optional argument is found in the cell. The error message says

because in the search for the closing ] TeX find a closing brace (it would be too long to explain where it comes from).

With Sigur's workaround, what remains is

and now the & is not at the same level of grouping, so the cell is not terminated; TeX finds the [ so it does

and, since the expansion of \\optal is [#1]->a #1 b the braces around the argument are stripped off and

is found, which terminates the cell at the right time.

You can hide the & from the argument scanner without having to put a {} group in every instance by using the {\ifnum0='} idiom used in all table macros. Note however that (unlike the explicit use of {} within the argument) this does introduce a {} group into the cell, which does not affect your example but could in principle (hence my modified example with +. Hiding teh & automatically without introducing a {} mathord atom is possible but harder. 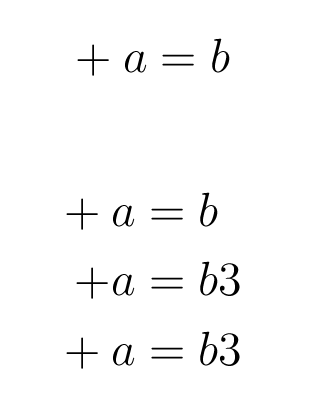 Not the answer you're looking for? Browse other questions tagged optional-arguments ampersand or ask your own question.