How can/should I include annotated images?

It's often the case that I'd like to include some graphic in a LaTeX document and overlay it with some text or other annotation, maybe including arrows or other simple graphics. The annotations can be easily handled using TikZ, so obviously if I create the graphic itself in TikZ, I'm all set. But sometimes the graphic is very complex and it's not practical to recreate it with TikZ commands. In these cases, I would like to include the graphic file directly, but still be able to layer my annotations over it. Editing the image to include the annotation is a possibility, but I'd really like to avoid that because the annotations then wouldn't reflect the document's font style and size, and also because it'd be harder to change them.

Is there a preferred way to include an external image and then layer additional content over it? A solution that lets me continue to use TikZ for the annotations is preferred, but not required.

EDIT: All three answers (overpic, a TikZ node, and \pgftext) work fine, but unfortunately I can only accept one, so I'm going with the one recommended in the "official source," the TikZ manual.

The pgf/TikZ manual suggests using the command \pgftext to insert external graphics (section 53.3.3 "Inserting Text and Images"). Here's an example taken from this seminar (slides 5 and 6 in the presentation version):

There is also a hint elsewhere in the manual (in 53.3.1) that the command \pgfimage can be used instead of \includegraphics (although still within the \pgftext command); however, searching for \pgfimage in the manual doesn't turn up any further explanation of this command.

The \pgftext command is something of a special command. It "escapes" out of the current picture back to "normal TeX". It is, therefore, somewhat like a \node command. It works by constructing a box which is then put into the picture. By default this box is put at the current origin. A simple way to move it, therefore, is to (temporarily) tell TikZ/PGF to move the origin priori to issuing the \pgftext command.

In the 2.10-CVS version of the manual, the \pgftext command is documented in Section 77.3.3. There is also some important information about how it interacts with scopes in Section 77.1.2 (note especially item 5 about the ability to put another pgfpicture inside a \pgftext command, something that should never be done with \node!).

In summary, \pgftext is somewhat akin to \node in that it allows you to put "normal TeX" in your picture. However, the two are different in that a \node is considered part of the picture but \pgftext is for things that are meant to be somewhat separate.

Using TikZ, you can include the image inside a \node:

There is a complete example at this site.

If you are creating graphics such as plots, you can use the R programming language along with the tikzDevice package that an associate and I developed. The tikzDevice encodes graphics created by R into TeX commands. We just released a new version, 0.5.0, that includes support for inserting named coordinates into the generated figures so that they may be further annotated by TikZ commands.

The overpic package sounds to be just what you're after. From the package description:

The overpic environment is a cross between the LaTeX picture environment and the \includegraphics command of graphicx. The resulting picture environment has the same dimensions as the included eps graphic. LaTeX commands can be placed on the graphic at defined positions. A grid for orientation is available.

Note that it is possible to use other graphics formats besides .eps -- anything you'd be able to use with \includegraphics will still work with this package.

To easily get the precise relative positions (which is often quite tedious) and to generate LaTeX code automatically for such example as shown below, you could use the new web-based LaTeX Overlay Generator, which I built for such cases. This is just a small interactive tool, which helps you to find the right locations without using a manual grid-based approach. 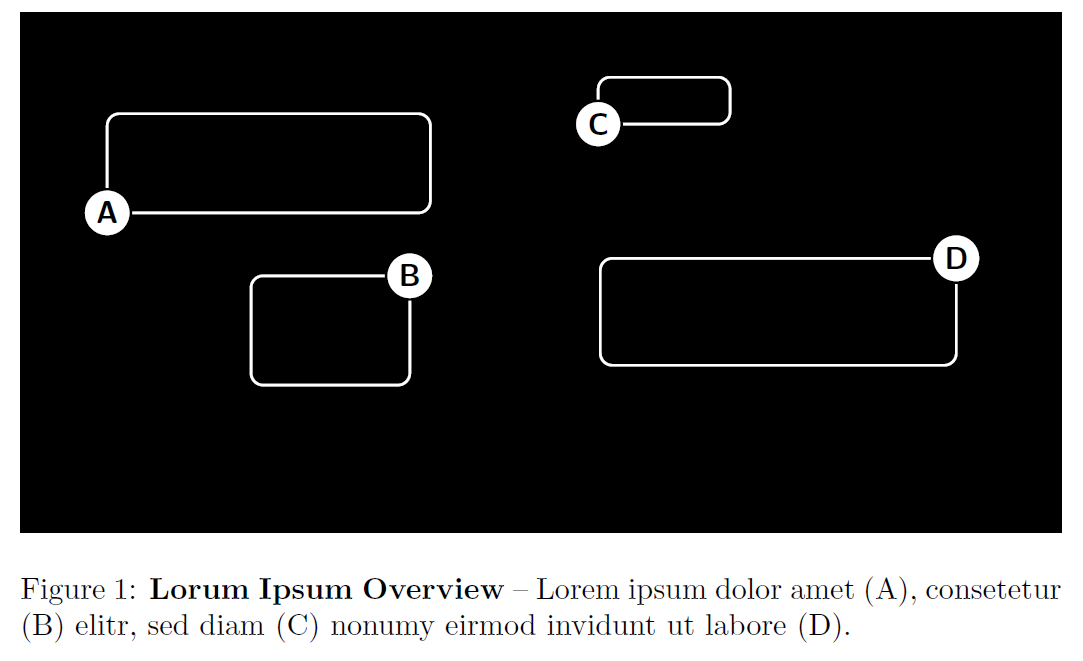 In the following the source code of a minimal working example generated by the LaTeX Overlay Generator.

Not the answer you're looking for? Browse other questions tagged tikz-pgf graphics or ask your own question.

11
How can I annotate an image with arrow and text?
1
Adding symbols to an image
447
Drawing on an image with TikZ
12
Annotating a pgfplots graph
19
What is the advantage of using \includegraphics instead of \pgfimage for ordinary image inclusion?
8
Mathematical formulas on a graph (not made by TeX)
1
How to superimpose two images in a beamer presentation?
3
Switching from PDFLaTeX to XeLaTeX is messing with my pgftext coordinates
0
Image overlay generator - How to annotate sub-images in the center of each overlay box? (caption-diagram next to original image)
2
How can I add some annotations to a screenshot so that the font can fit the (La)TeX document?
see more linked questions…

4
How should I organise my document/files in order to easily export TikZ figures as images?
11
Can I conditionally scale an image with graphicx
14
Making a 3D colored pyramid in tikz
4
Drawing on multiple images inside the same tikzpicture, how to get the right transformation of coordinates?
17
Best practice to include (standalone precompiled) graphics
0
Tikz include graphic and text
6
Set baseline from coordinates in a standalone TikZ image
4
Tikz background color of node multilayer