Typeset a series of characters with equal distances?

However, the width of the "+" and "-" sign are very different in the used font (standard font in KOMA script class scrreprt) and a sequence of 2 or 3 dashes creates one long or very long dash....

So I'm searching for a way to easily typeset e. g. "+ - - - + -" with a little spacing between the characters and (if possible) that several different strings composed of the same number of characters ("+" or "-", "a", "A" and "0") would be aligned with each other, when they are in the same column of a table.

I hope I could make clear what I need, some examples how it shall NOT look are found here:

It looks a little better, if I insert \, between the characters, but as the widths are different, it is still not aligned: 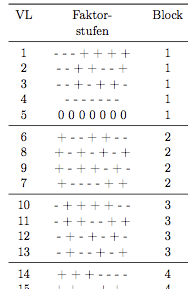 Does anybody have an idea how to solve that? Maybe a command that parses the string like --+--++ and typesets it with a "constant spacing"? 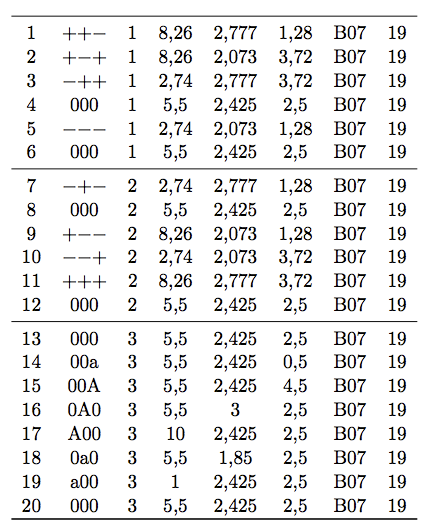 example and further question about side-effects:

I used the solution of Michel and it looks good, but there is one thing I'm not sure about: Is it possible that it changes the free space between columns? I have the impression that the first 3 columns are closer together than the rest... How can I fix that? 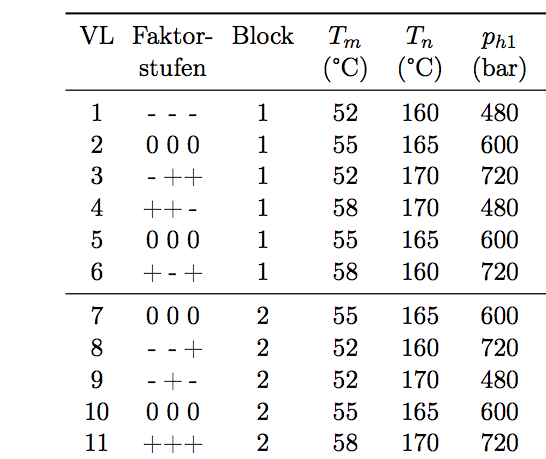 \stretchit appends an underscore to its argument and passes it to \realstretch, which recursively 'eats' one letter at a time, and typesets it centered in an \hbox stretched to \stretchlen. All letters are thus equally wide, and since they are centered, aligned nicely.

--- solution for the question:

Be aware that it makes a difference if you use a single math-mode or separate ones for them. The last sign has different spacing in the first case because it is taken as an unary sign but the others are operators. 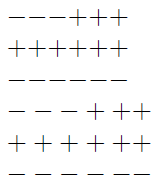 For the alignment with the other signs a, A and 0 I would recommend that you make macros for all and set the width manually the one of the widest (should be $+$).

one possible form to typeset your table would be to use a table column for each character: 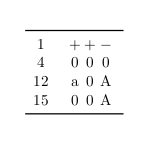 Michel's solution is nice, but I'd like to present some improvements.

It's not necessary to have \splitterm and to define \temp at each stage, since we're collecting tokens one by one and those tokens are simple characters. It's best also to set \stretchlen to the widest character, in this case +. Finally, there's the particular case of - that should be treated differently with a $-$.

I've left commented the line with \hbox: with \makebox it's more in the LaTeX way of thinking; the two lines give the same result, but of course \makebox is a bit less efficient than \hbox.

Some years later, the solution can be made more robust, with the possibility of managing other characters that need special treatment.

There are however issues with verbatim text which you might run into... Another solution might be to use \texttt and macros for your plusses etc. Here's an example:

You need to use a macro like this for the minus sign because otherwise they get turned into en-dashes if you use the fontenc package. This should also mono-space letters easily.

Not the answer you're looking for? Browse other questions tagged macros spacing or ask your own question.

58
How to obtain verbatim text in a footnote?

18
Add extra space only between two specific columns of a tabular without adding extra columns
7
Different spacing between section and content
1
Table column spacing / headings
6
Vertically align characters raised with \stackrel
4
How to obtain a justified paragraph with correct word-spacing in tabular environment?
2
Table spacing and alignment
1
Table row & column spacing (not padding!)?
3
Typeset siunitx-like percentage value in math mode
3
How do you make a table with a set width and equal intercolumn spacing?
0
Control the spacing between characters in a long equation