If have not found a way to include that number in my document. Unless I have overlooked something, the obvious suspects (datetime, isodate, scrtime) seem not to provide a ready-made solution.

If you want to calculate it portably in classic TeX (actually I used etex, arithmetic but that could be easily removed) you can do this (which actually is exactly 1 day out in my system, so you could either fix my arithmetic or just add a day at the start:-) 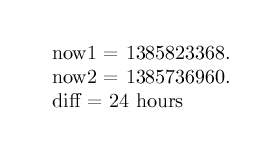 This works with pdflatex and lualatex, with --shell-escape; of course it's system dependent and will work only on Unix systems.

Apart from interesting answer by David and his suggestion about calculating it manually, here is my solution based on luatex. Please note that this is just a guideline and the code is neither clean nor complete by any means. There are lots of rooms for improvements!

You have to compile this by lualatex myfile.tex. Other options for using lua function os.date can be found here.

To supplement that part of David Carlisle's answer which uses the POSIX date utility, here is a way to get the epoch on Windows.

On Windows the "epoch time" concept not only implemented in Unix-like environments and their utilities, but also in the standard C library functions implemented in the Microsoft Visual C Library.

That is to say, Microsoft's <time.h> material is based on a Unix-like time_t whose units are seconds, and which measures since the Epoch. This is not required by ISO C, but it helps port code which assumes that representation.

So you can make yourself some trimmed down epoch.exe with Visual C that prints the time.

I just compiled this code with VS2008 into a Win32 console application.

The statically-linked (no dependency on a msvcrt.dll) executable (156 kB) is here.

Not the answer you're looking for? Browse other questions tagged datetime isodate or ask your own question.

6
Timestamp in document / pdf name
5
How can I date my entries into a latex document? (Not just one date, but several dates)
5
How can I display date information in document class "amsproc"?
4
how to insert the date (today) in the middle of a document
44
Generate analog clock with numbered face, add seconds, Roman numerals
5
Is there a way to include the document creation time with XeTeX?
0
How to change the timezone of my latex document irrespective of my computer time zone using datetime2?