Uneven vertical alignment with $\in$

And the rendered output:

Why is \in being placed below everything else? Also, is there a way to "nicely" include \forall and \exists without manually spacing them with \; and \,?

The following is more of an extended follow-up comment to Przemysław Scherwentl's answer than a new answer. Too long to fit into a "comment" box...

Borrowing (stealing?!!) some code from @PaulGaborit's answer to the question Why do all symbols in $x \in X$ have their own baseline?, here's a visualization of the size and positioning of the symbols \epsilon, \varepsilon, \in, and +, using the default Computer Modern math font:

Note that \in is quite a bit larger than either \epsilon or \varepsilon and that the two math symbols are aligned on the math-axis line. Because the math-axis line is slightly above the half-way mark between the baseline and the x-height line, the upper edges of the \in and + symbols protrude further above the x-height line than their lower edges protrude below the baseline.

Addendum: Just for comparison, here's the output of the same code, but with the math font newtxmath (which is based on/derived from Times Roman) in use instead of Computer Modern:

Interestingly, the symbol \in is a bit smaller in the newxtxmath font than it is in Computer Modern; even so, the \in symbol is still clearly larger than the glyph for \epsilon. And, because \in is centered on the math-axis line and its lower edge touches the baseline, its upper edge clearly protrudes over the x-height line, whereas that of \epsilon does not (by design, of course). Another difference between \epsilon and \in is in the position of the middle bars: It's on the math-axis in the case of \in, but well below it in the case of \epsilon.

Either way, it's clear that the font designers were well aware of the need to keep \epsilon and \in easily distinguishable.

You are partially answering yourself. Because $\epsilon$ and $\in$ are rather similar, a typografic custom says that the latter should be big enough to see the difference. It is not under: it is centered, but big. Let us see: 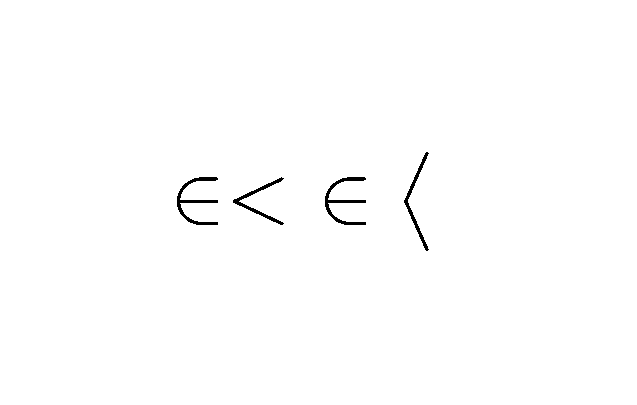 In the first case \in is at the position od < (see the vertical alignment), in the second also, but the < sign is big. Do we say that it is placed below everything else?

Not the answer you're looking for? Browse other questions tagged math-mode spacing vertical-alignment or ask your own question.