\vec{x} but with arrow from right to left?

I have two variables: \vec{x} and another one which is somehow dual to the first. Therefore I would like to symbolize the second with something similar but a leftarrow on top of the x. I already tried \stackrel{leftarrow}{x} but it looks to different (too big gap between x and the arrow, and too big arrow).

Is there a way to define a \cev command which does what I want?

This may not be the best way, but two \reflectbox commands will do the trick:

A \cev command that seems to give good results on most letters and works correctly (apart a very small drift) in subscripts and superscripts. 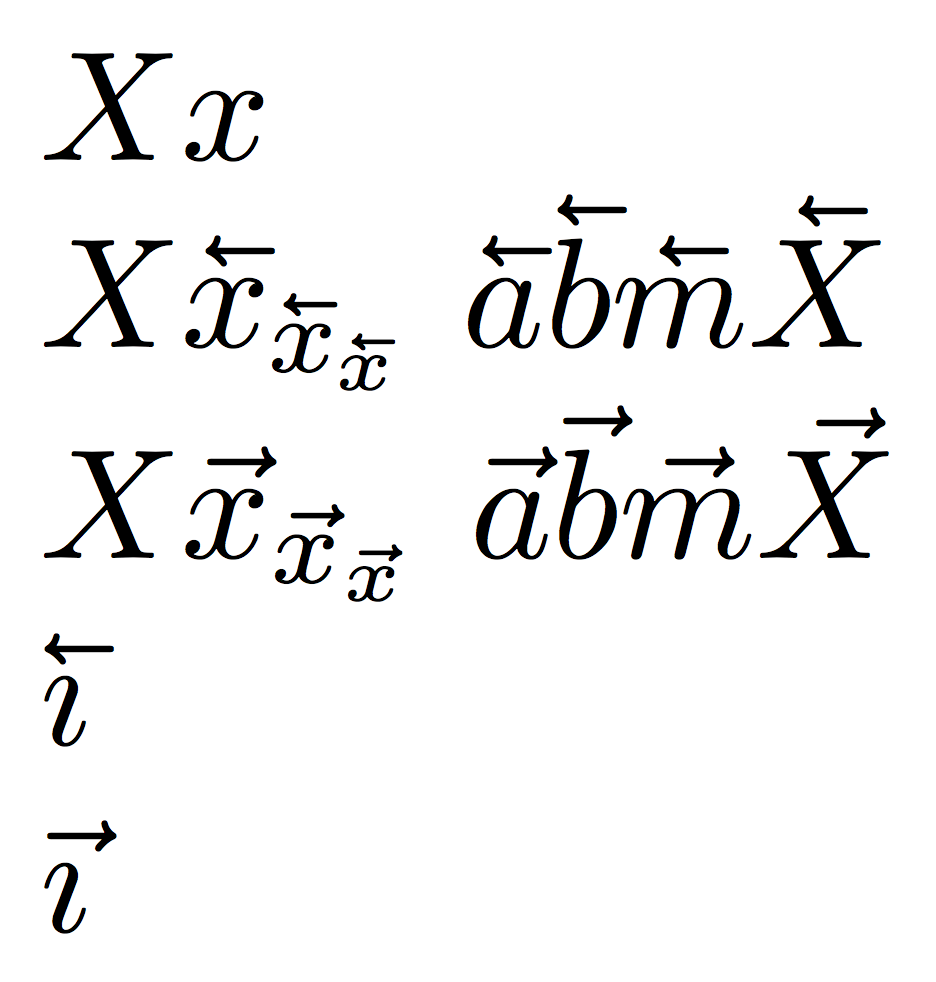 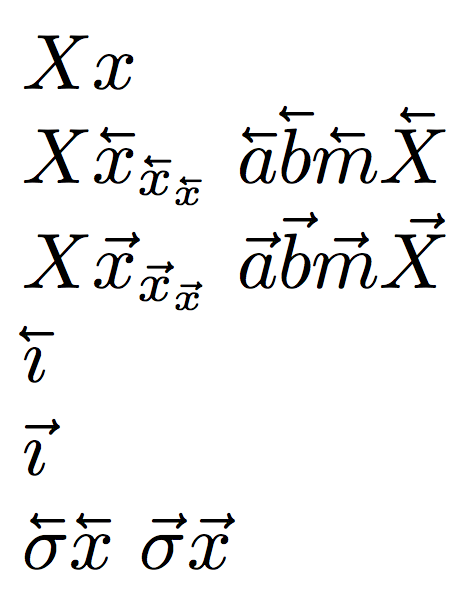 The extensible \overleftarrow might do the trick. The problem is that the arrow is bigger than the one used for \vec, as shown by \[\overleftarrow{a}\overrightarrow{a}\vec{a}\] . To have consistent arrows, you should redefine $\vec$ :

Another solution is the \overset command from amsmath, used with \leftarrow. However, the arrow is still bigger than the one from the \vec command.

*Edited to add * Using \shortleftarrow from the stmaryrd package slightly improves the above construction.

The \vec is an accent (and its own symbol; hence all \leftarrow and similar constructs look different), and the default Computer Modern font doesn't have a symbol which would be its mirror.

In addition to rotating/mirroring the vec accent symbol, as shown by Ian, you could make use of one provided by, say, STIX/XITS (if you use XeTeX). Then you could define:

I have a little to add to Frederic's solution:

Basically, the arrow in the subscript makes it smaller and reduces the vertical space between it and the variable. Unfortunately, nesting doesn't seem to work.

Eberhard Mattes provided in the 90s an extra font called emsy containing the missing arrow. The file is downloadable here

Anyway, it's not easy to use since you have to put the .mf and .tfm files in the correct directory. Once this is done, you may define

Not the answer you're looking for? Browse other questions tagged macros vector or ask your own question.

8
Read command with varying input arguments
3
I want \newcommand to replace something in a document by something else
8
Why to use [T2A, T1] when [T2A] is enough?
5
How to define a command that defines another command?
4
New command for filtered colimits and limits
2
How to prevent \vec from making \left(\vec{f}\right) ugly?
3
Use toks or commands in selectlanguage from babel
2
Defining command with asterisk
3
Why does \renewcommand error if the command does not exist?