I am attempting to draw some pictures using tikz, with the decorations library, and am encountering a `Dimension too large' error. I have read the 20+ other questions/answers about this error, and have not found them to contain a solution that works in my case. (Apologies if I missed something.) In particular, most of those question seem to have to do with using pgf to do computations, whereas I am just using it to draw, and the error is coming in some process internal to tikz calculating its line paths.

Cutting to the chase, here is a MWE:

The first tikzpicture compiles, the second does not. When I put in the fpu and \pgfkeys lines (commented out above), as suggested in various answers, I then get an `ill-formatted floating point' error.

(Solutions that involve modifying the picture code itself (eg scaling and changing the numbers to get the same image, changing the specific drawing commands or method, etc) will not help me --- I was coming up with such hacks on each individual picture, but eventually the hacks themselves became unworkable on my actual more elaborate pictures.)

There is not much you can do. The problem is with TeX and turning on the fpu library is not going to help you. See it like this, TikZ relies on TeX length registers and other TeX related mechanism to copmute the paths. Then sends to the driver as paths.

Now the driver is pretty good at scaling down objects. But your object description never reaches to the driver. Because TeX can't handle the computations you throw at it. Because of very old but still shiny gears can't crunch anything that precise. By that I mean very tiny arc length due to your line width specification (It's too thick for such arc). SO it is still the same thing. You are hit by PGF computation just as other answers.

Turning on the fpu library doesn't help off the bat because most of the internal PGF commands don't communicate well with it as you noticed when you turned it on. I would consider redrawing your image better and larger and then scale it down. I don't know why you would need such a small object but if you are trying create symbols etc. there might be other ways.

As a proof of concept consider this (zoomed 6400% in AcroRead) 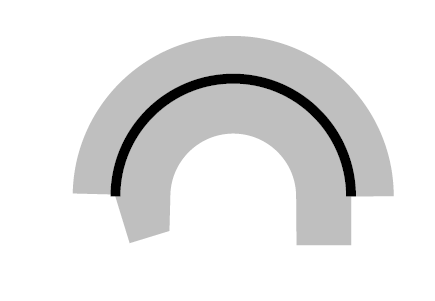 Once you can draw it you can scale ridiculously. But in your example you can't draw it.

Not the answer you're looking for? Browse other questions tagged tikz-pgf pgfkeys decorations fpu floating-point or ask your own question.

20
Adjusting the size of an arrow
3
Workaround for "dimension too large" for short, custom decorated, arcs?

14
Rotate a node but not its content: the case of the ellipse decoration
16
Numerical conditional within tikz keys?
6
TikZ/PGF: dimension too large even though below \maxdimen
17
TikZ: Drawing an arc from an intersection to an intersection
9
Line up nested tikz enviroments or how to get rid of them
1
Dimension too large-errors by TikZ datavisualization
3
PGF fpu "ill-formatted floating point number" using shapes.symbols library
2
LaTeX Tikz: Compare two \def arguments
3
Arrow between BTrees
2
Document header with tikz