How to use a large number of arbitrary rgb colors in a TikZ image?

I have a document with some TikZ images in it, which are automatically generated from a program I have written. All images are fairly similar, and each of them contains of a large number of squares with different, arbitrary rgb colors. My question is: What is the best way of coloring all this large number of squares?

The method I have used so far consists of defining the color fillcolor by using the macro \definecolor, before drawing each square, and of using that color to fill the square. That means that each time I'm drawing a new square, I'm defining fillcolor again.

However, I'm not so sure that is the way to do it. pdflatex seems to require very much memory when compiling the document, and, for some strange reason, runs out of memory if I include more than 5 of the images (even if I increase the amount of memory tenfold when going from 5 to 6 images). Is there any chance that it stores all the colors I have defined, and that I need to make pdflatex "forget" about fillcolor before calling \definecolor again?

Update: Below is an example of one of the TikZ images I want in my document (it's a vizualization of the phase fraction field in a two-phase fluid simulation using the finite volume method and the volume of fluid method, and yes, I know, the fluid interface isn't exactly crisp): 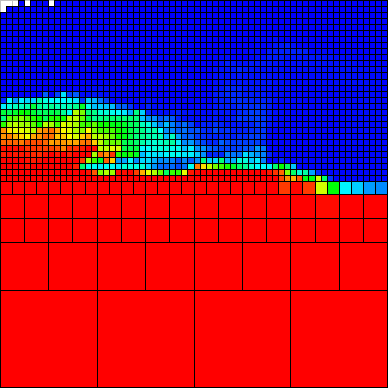 First, for each square, fillcolor is defined with \definecolor, and the square is filled with that color:

Then the sides of each square is drawn, for example

As I said in a comment, if \definecolor, simply stores the color definition in a TeX macro, then redefining it will recycle the same macro, and thus will not use more memory.

However it is also possible that \defincolor is pushing some kind of literal PDF code which defines the color for the PDF engine. In this case, as far as I can understand it, no more memory should be used either for redefining a lot of times the same color.

Anyway, just in case, it is possible to use a RGB color without previous definition. Here is how.

Here is a code which shows several options: 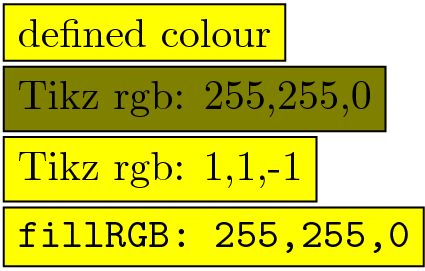 I believe that your approach with \definecolor is fine.

My suggestion would be to use the PGF basic layer rather than tikz, i.e. to use something like

Please look up the mentioned commands in pgfmanual.pdf as I might have misspelled some of them (I cited by heart).

My suggestion to combine stroke and fill path and vary only the color might make sense for you and could be applied to the tikz path as well. This should also reduce memory consumption and typesetting time.

One remark which is actually out of scope of your question: my suggestion to use the the draw color fillcolor!80!black is inspired by the default of pgfplots which I find less harsh compared to black outlines. And pgfplots has the same use-case as here: what you write here is actually a kind of mesh/surface with faceted shading and explicit color input (in pgfplots: \addplot3[surf], compare pgfplots: color a (3D) surf using arbitrary RGB colors) .

Even after memory reduction, you have 'a lot' of data points (speaking in terms of what TeX is supposed to handle). So, even reducing memory might reach limits of TeX eventually. If one image works but more than one fails, you may benefit from using image externalization. You may also benefit from using lualatex instead of pdflatex as lualatex has dynamic memory allocation. You should also experiment with \clearpage between adjacent figure environments to ensure that TeX does not have old figures in its memory (as @JLDiaz suggested in a comment). The details for image externalization and memory consumption are summarized in Section "Memory and Speed considerations" in http://pgfplots.sourceforge.net/pgfplots.pdf

To make a smooth and simple shading between red and blue (via orange, yellow, green and cyan), you can use the Hsb color model (provided by xcolor package):

Or (with another syntax): 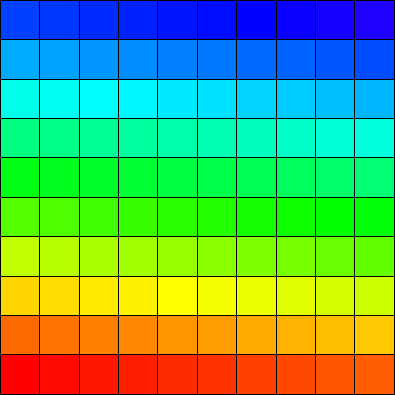 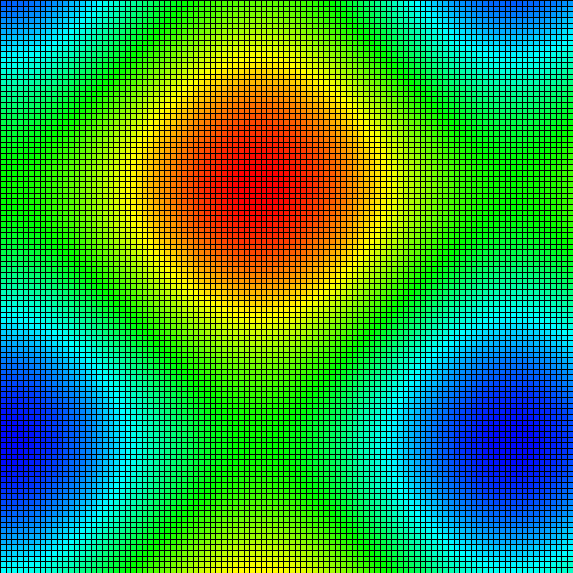 Not the answer you're looking for? Browse other questions tagged tikz-pgf color memory or ask your own question.

2
TikZ plot leaves empty space when using a predefined color (reopen)
1
Fill and draw option
11
Creating a smooth gradient between two colors on an edge in TikZ
4
Two parallel curved edges in Tikz (Or, one curved edge with two colors side-by-side)
2
Use separate colors for a multi-bar diagram plotted from file
8
TikZ: Circle with color transition
7
Filled curved in legend entry - tikz/pgf
1
White color in figures change color, because of `blend mode = multiply`
1
Define a pic with multiple argument and use them in for loop