Adding arrows with values over an expression

I'm trying to add arrows to math expressions (especially within limits) to note that there's a value assigned to certain term when solving a limit. I've come across the cancel package and its command \cancelto{}{} but I have 2 problems with it: 1. It strikes through the term like it's canceling it (obviously) 2. It only goes upwards (right upwards but the right part doesn't bother me), whereas I might need it to go downwards when I'm showing a tendency in the denominator of a fraction.

Searching here I found a custom command that sort of does the job (I modified it a little), and got it going, sadly it works half the time. The other half it just disarranges all the baselines of the other elements in te equation. I'll leave you the code of the commands (which again, is not mine to credit for) and an error that I'm having in hope someone can help me. I'm still learning Tikz so I'm unable to solve it myself although I suspect that there lies the answer to my problem.

The code modified by me:

The part where I'm having trouble (I've earlier parts in which this worked but surely a correct code would still work on those).

And a snapshot of how it displays, notice that what I'd like to happen is that the arrows are added on top, as if the equation didn't even know they are there. Now it seems it is responding to what I add trying to center the + and - signs (even the parenthesis if I use \left( and \right) ) distorting a normal look.

Basically what I want is the equation to ignore the arrows and to be typeset just as if they weren't there (except of course for the vertical spacing not to be superposed with other lines or equations on top or bottom).

I've managed to create a new command called \dtendto[]{} that does the same except that the arrow goes southeast instead of northeast but I think the solution is the same for both so as not to make the post longer I ommited it.

I added inner xsep=0pt and outer sep=0pt, also I limited the bounding box.

In my edit, I got rid of the calc library, as it isn't really needed. Furthermore I set inner sep=0pt of the nodes and shorten <=.3333em of the arrows, to preserve spacing between digit and arrow, whilst cancelling extra space below the digit.

I repleaced all values by scalable units (ex and em).

Also, you don't need the \canc macro, as it will always default to \scriptstyle in your implementation.

In the real output the bounding boxes won't be highlighted. I just colored them green for illustration purposes. 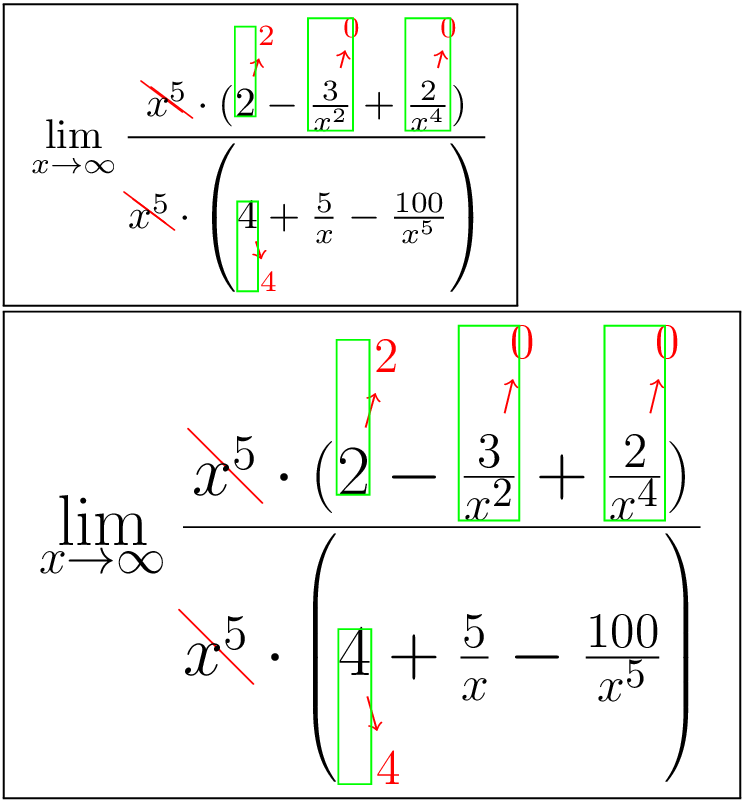 Not the answer you're looking for? Browse other questions tagged tikz-pgf equations arrows or ask your own question.

5
How do I get arrows and nodes in my commutative diagrams to line up?
7
Odd behaviour with arrows and multipart rectangles
1
Concentric arc arrows in TikZ
1
Boxes and arrows with text over them (tikz)
2
Adding vertical arrow+math formula over equal sign
6
graph dependency with some equation over arrows
2
Cancel a term using tikzmark package
0
Adding arrows between rows of an equation LaTex
4
Tikzpictures inside newcommand. Text below tikzpicture. Space between side by side tikzpictures. Overlapping drawings. (Not fully answered)