This MWE is self explanatory: 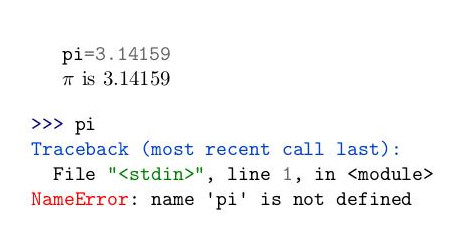 The \py and \pyb commands are executed via a Python script. The pyconsole environment is executed in a console emulation. So there isn't overlap between the two, and variables aren't shared. (Regular Python commands/environments always start with py, while everything console-related starts with pycon.)

You probably want to look into the \pycon and \pyconc commands. The first is used for getting the value of a variable, while the second allows you to run console code without showing anything. There is currently not a \pyconb. My reasoning is that showing code without output isn't console-like. But I might consider adding such a command in the future.

Not the answer you're looking for? Browse other questions tagged python or ask your own question.