I'm trying to get TikZ to draw Brillouin Zones for two dimensional lattices, but I've not had much luck so far with anything I've tried. Brillouin zones are, basically, the area of space around a point in the lattice which is closest to that point, and so are similar to Voronoi diagams. You can see what these look like in this image, which has the first, second, and third Brillouin zones drawn on: 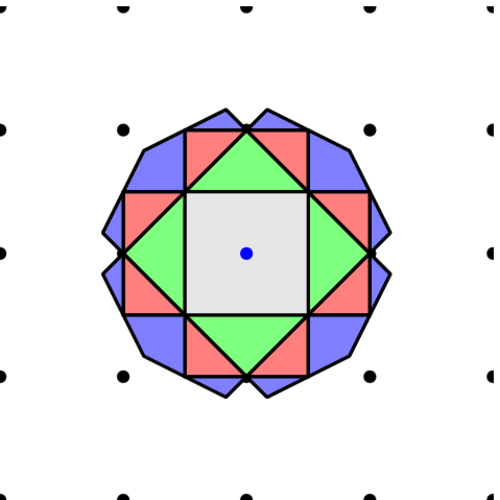 If I were to draw this by hand I'd construct the first Brillouin zone by drawing a line from the centre point in the lattice out to each of the points a distance of 1 (taking the lattice points to be separated by a unit distance) from the centre point, so that would be the ones north, east, south and, west of it. Then I'd take the perpendicular bisectors (in physics parlance these are Bragg planes) of each of these lines. The first Brillouin zone would then be the area which is enclosed by the perpendicular bisectors (and is the grey area shaded on the image above). The higher zones are constructed in the same way; a slightly variant explanation is given on this site. It also has code in Asymptote, but it seems to just be hard-coded in.

Is there a way that this can be done in TikZ, and is there a way that it can be done both for any given lattice, and for any number of Brillouin zones? I've tried a few approaches, without success, including various attempts to do it with Lua (which I'm very unproficient in), but the only thing I really have working is a way of drawing the lattice points, which I've included here for a square lattice, but it's not too difficult to modify this to give a hexagonal lattice.

Longer answer: No! This task can be computationally really expensive for high values. You should separate the calculation from display because (I suppose) you don't want to start from scratch each and every time when you compile. And if you do that separately, why don't you use a better suited tool for that which can easily store and use previously calculated stuff for any given lattice?!

Longer answer on the "Yes" part. Here's algorithm which might just work and can be implemented in LaTeX (but really shouldn't). It's a bit "hacky" because this description doesn't really imply a "closed formula" for coloring (and maybe there isn't one).

I think the following should work. And this statement is based on the inductive nature of the algorithm.

This can be improved algorithmically in several ways but should get you started.

Another possibility is to have the lines and calculate a color pixel-by-pixel for the (bitmap) image. This can be much better if you have a large k but a small picture.

I've offered a bounty on your question hoping for a better approach than the above. No luck.

13
node names and nested loops in TikZ
11
Problem filling intersection using TikZ
14
Root systems and weight lattices with PStricks
7
What is the TikZ equivalent for ([offset=2]{A}B)?
7
Truncated octahedron in TikZ
12
Drawing rectilinear curves in Tikz, aka an Etch-a-Sketch drawing
2
Site Percolation Diagram
2
Can rulercompass tools mark intersections without drawing the circles?
0
Draw a square with given points