ConTeXt: Scale font for text based on maximum width

Looking to devise a scaling factor for two fonts such that the text, when added to the final document, fits on one line.

In the images below, the two fonts are the first character (e.g., "M") and the title text ("My Extraordinary Title"). In the first image, the text is split across two lines:

While the second image, which is desired, has the font scaled to fit on one line:

The large M in the second image should be scaled down at the same ratio as the rest of the text, hence the desire for a scale factor that can be used against both the title text and its first character.

I'd like to define a macro along the lines of the following recursive function:

Maybe I'm going about this the wrong way, though, and am open to other approaches.

For example, given a \frame is it possible to scale the frame such that it fits the \textwidth? That is:

Then somehow scale the framed down if its content width exceeds the \textwidth?

How would you scale a line of text (or a framed element) in ConTeXt such that line breaks do not occur, but the font scales down instead?

For a single line of text, a simple solution is to use \scale with only maxwidth specified. For example: 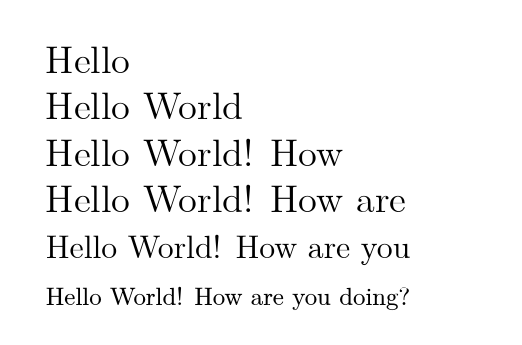 Not the answer you're looking for? Browse other questions tagged fonts line-breaking context width text-manipulation or ask your own question.

2
Get the stem width (i, T) of a Font in ConTeXt Mk IV
5
Combining font switches in ConTeXt
5
How to properly scale up fonts from newtxtext and mtpro2?
4
LaTeX - how to detect scale of \includegraphics
2
How to scale MetaPost drawings with consistent line width and label text size in ConTeXt?
1
ConTeXt specifying font
2
ConTeXt and OldStandard font