I have a group of tex files named according to the following convention:

I have so far found some code that lets me remove the end of a file name: https://tex.stackexchange.com/a/21808

I have also tried using \StrBetween from the xstring package to process \currfilename from the currfile package, but this doesn't work.

Actually I think I'm using \StrBetween wrong, but even if I do something like

it doesn't print out yyy, but if I do

then it will print xxx_yyy_zzz.

Since you have a very specific filename-pattern, you can use TeX's \def to define a specific parameter text, from which you can extract the elements of the filename within the argument text:

\jobname carries the name of the file (without extension), which is then processed as #1_#2_#3, each component of which is extracted as \fileA, \fileB and \fileC, respectively.

Werner's solution is the better way to parse the separate componets in this case, but here is a method that uses the xstring' macros \StrBefore, and \StrBetween to extract the relevant components.

With the file below named "theory-relaivity-Einstein.tex", this outputs:

If the job name is xxx_yyy_zzz.tex, then the output will be 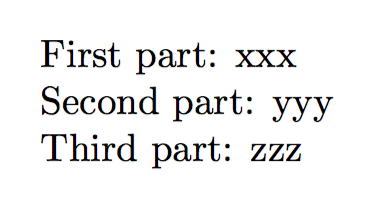 If the job name is xxx-yyy_zzz.tex, then with

one would get the same output.

Not the answer you're looking for? Browse other questions tagged parsing or ask your own question.

7
Parse filename and extract revision from name
3
What causes this runaway argument when attempting to parse \jobname?
2
Include LaTeX file named with substring of current filename
2
Command receiving multiple parameters in one string fails when passed parameters are in a variable