I want to embed plantuml diagram into lyx document

Please help me in embedding plantUML diagram in the LyX document.

I am new to LyX, I could not figure out how to generate the diagram on the fly while converting the doc to the PDF.

Let me write down on high level what I want to achieve.

Please guide me how to achieve this.

I'm writing a separate answer, since a lot of factors finally matter when getting PlantUML to PDF:

Using SVG rather than PNG or EPS

SVG as an intermediate format has advantages over PNG and EPS. The PDF can contain the original text elements from the PlantUML diagram (e.g., class names, methods, comments, etc.), which could be useful for searching, indexing, copying, etc. in the PDF. Using PNG not only loses definition (it's raster as opposed to vectorial), it also loses the text information. Even though EPS is vectorial, my experience with EPS in LyX in PDF is that I lose the text, as it appears to be converted to outlines.

SVG is not without troubles in LyX, however. Inkscape must be properly installed and visible via LyX. LyX may or may not do this, depending on the platform. A good way to verify it is to run the Reconfigure command in LyX and to look at the Messages window. You should see that it finds inkscape in the list of environments it's looking for. If LyX doesn't find it, make sure you've added the inkscape executable to the Path in LyX Preferences. On my Windows 8.1 system, it wasn't installed by default.

Another trouble I found with SVG (at least in Windows) is with the mapping of fonts. On my Windows 8.1 PC, PlantUML by default generates SVG files using a font that shows up as "sans-serif" in inkscape. The font inkscape uses for "sans-serif" looks like Lucida or maybe MS Sans Serif, and it is actually wider than the one that PlantUML used to lay out the diagram before it generated the SVG. This results in text in the SVG (and the PDF later) that is too wide, e.g.: 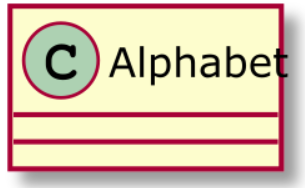 One solution I found was to specify the Font in my PlantUML diagram as follows:

This way, PlantUML and inkscape use the same specific font, and there are no mistakes with the layout. One caveat with this strategy, however, is that fonts are system-dependent. That means Arial Unicode MS is one of the fonts installed on my Windows 8.1 machine and the above PlantUML statement probably won't work on a Linux system or MacOS. The advice from PlantUML's site is finally:

Please note the fontname is highly system dependent, so do not over use it, if you look for portability. Helvetica and Courier should be available on all system.

A cool feature of PlantUML is the listfonts statement. Put it as the first line after @startuml in a PlantUML file and you'll get a list of all the fonts PlantUML can find.

There is probably a better solution, which is to tell inkscape how to map "sans-serif" to the appropriate font (e.g., Arial) that PlantUML uses by default. But I couldn't find that answer. It may be a bug in Windows' inkscape; it may be a feature that is missing. I think I didn't have this problem under Windows 7, perhaps because of the default fonts and the way inkscape chose to select the equivalent for "sans-serif". My Windows 8.1 machine has font called 8514fix and 8514oem that appear similar to the Lucida Sans, and are at the top of the font list. I'd guess that inkscape is picking one for its equivalent of "sans-serif" but PlantUML is using another. Your mileage may vary. See this and this for more hints.

If you activate PlantUML -> PNG and/or PlantUML -> EPS, when you generate PDF files, LyX might use one of those intermediate formats, which means you'll lose the fidelity of the diagram in the PDF conversion. 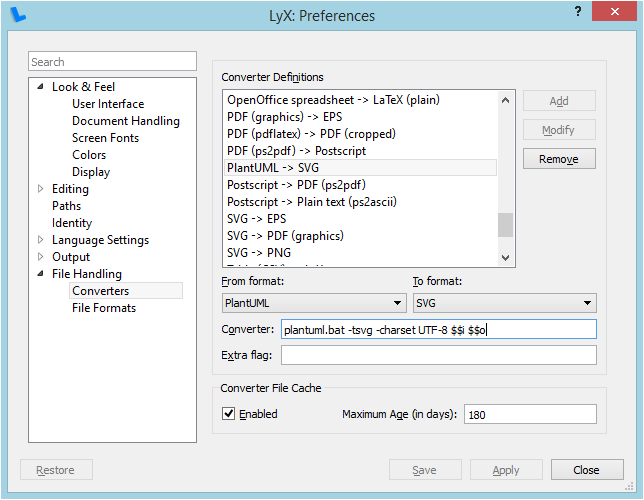 Note the command as follows:

To get the SVG to PDF, there's a converter that should automatically be there when LyX finds inkscape during its Reconfigure command mentioned above. But verify the settings as below. If inkscape is not installed, you'll get all kinds of weird errors and LyX will try to convert SVG to .ppm (at least on my Windows 8.1 system, that was what was happening). 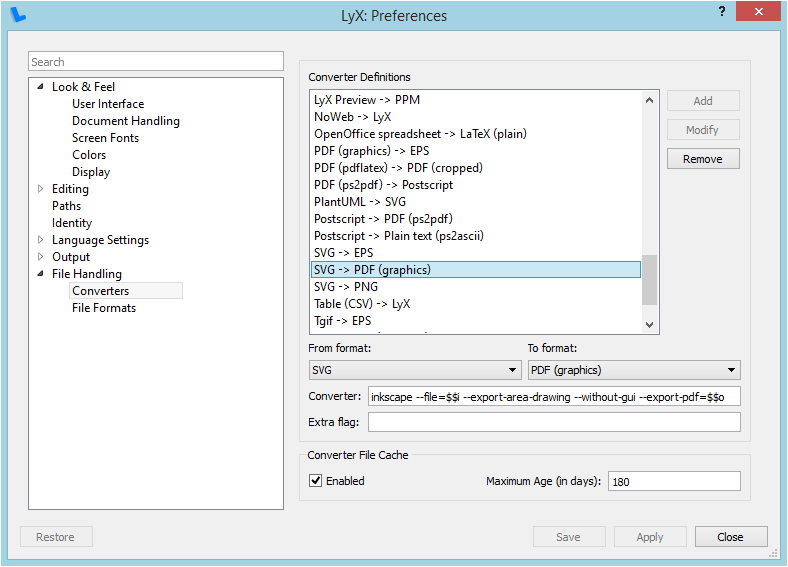 The SVG -> PDF conversion command using inkscape is as follows. It very straightforward:

Here's a final result with the following PlantUML code saved as UseCase.plantuml and inserted into a LyX document with Insert > Graphics:

Here's what it looks like in Adobe Acrobat. Note that the PlantUML text is PDF text (see the selection): 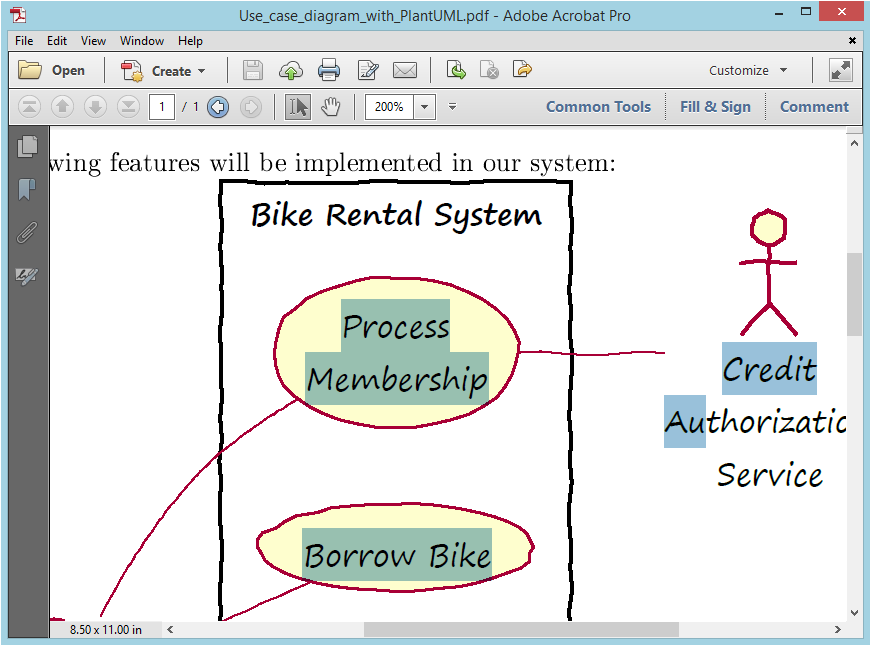 I followed Rajender's excellent explanation on how to do a batch file for windows to convert PlantUML files inside of LyX. There is one troubling problem: if you have syntax errors in your PlantUML file, the conversion fails and LyX only complains with an Error converting to loadable format.

The solution I found in Windows is to:

Actually, you can probably just put echo "hello" after the java command to cause the .bat file to succeed always.

As such, errors will appear in the PNG like this:

Here is the info I got from Rainer, and using his help I am able to display included .plantuml files.

Help to configure lyx with plantUML

A summary of the steps follows:

6
How to share setup between LyX users
1
LyX PlantUML with !include directives

1
How to write raw text verbatim in LyX?
2
Why is LyX trying to convert every image into eps?
3
How to make gv (DOT) files work under LyX
6
Lyx to Word Export issue
1
Lyx refuses to work with images of various formats; Error: Cannot convert file
1
Which graphics format is faster for compilation? PDF, PNG or JPG?