LaTeX math tabbing: Can we make alignat work this way?

The second alignat below illustrates my problem. 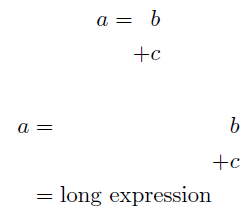 I want the third line of the equation not to alter spacing on previous lines. In other words, I want a math environment that behaves similarly to the tabbing environment. Could somebody help?

Edit: The example I show above is a simplified one. In my real problem, the part corresponding to = b is quite complicated. If we use Werner's solution below, we would be repeating the whole complicated expression in \phantom{}. So, I guess there is no ready-made tabbing-like environment?

My current workaround is to use \hspace*{} in place of \phantom{}, manually adjusting the position. (I'm not claiming it is better. Manual adjustment is annoying.)

Edit 2: Werner has made me realize that I simplified my code so much that a simple \phantom{{}={}} is a good solution to the simplified code. So, the example below is a more accurate illustration of my original problem:

In this case, (I think) we have to repeat part of the previous line in \phantom, which is annoying when b and c are complicated. As I said in my "Edit" above, I'm currently using \hspace* to avoid repeating the complicated expression in a phantom.

There are a myriad of ways you can achieve this alignment. Here are just two: 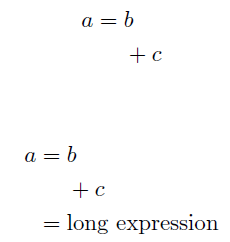 To get the third line to not affect the spacing of the first two you can use \rlap{\text{long expression}} and thus no need to change anything before that line: 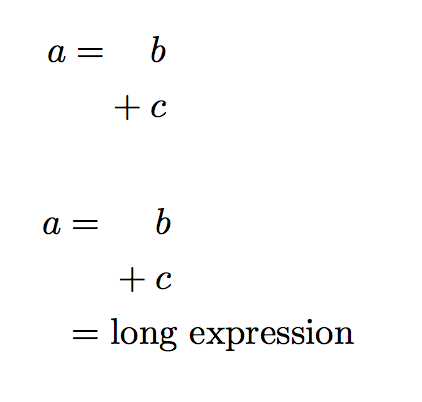 Not the answer you're looking for? Browse other questions tagged math-mode tabbing or ask your own question.

4
Emacs keyboard shortcut to insert \label{} \\ and a new line in math mode.
25
Why does \widehat behave differently if I insert \hspace{0pt}?
13
Tabbing for math mode?
4
Inlining aligned tabular material in block of text
2
tabbing numbering and alignat numbering
5
Using mathspec to change digits font in math mode isn't working
5
Can't generate png with Error: Erroneous nesting of equation structures
0
Writing Lines and Lines of Math Without Continuation Characters
3
How much work is it to implement tabbing in math mode?
1
How to make bold text more visible