Is typing an accented character and compositing it the same?

Suppose that I have T1 as font encoding (and therefore I will have no copy, search and hyphenation problems, etc).
Is there any difference between typing, for example, \^e and ê in the output?
My pratical experiences tell me that I have no problem with copy&paste or searching, both seem to work in the same way.

You're confusing between input and output encoding.

An input encoding is selected with a line such as

and this allows using accented letters in the LaTeX document, such as ê. The option used must reflect the encoding used for saving the file.

An output encoding is selected with

The two calls are not linked. All inputenc does is translating input such as ê into a lower level command, which is precisely \^{e}, by the way. It's a job for the output encoding transforming this “LaTeX Internal Character Representation” (LICR) into an instruction of the form “select the character in slot 0xEA (decimal 234) in the current font”.

A main source for misunderstanding is the fact that if

a document such as

seems to compile correctly. Tell it to your German friends: a big surprise is in stock for them when they try

that will be incorrectly typeset as “StraSSe”. This is because Latin-1 and T1 coincide in several slots, but not all of them.

German or not, both ê and ß will give unpredictable results if the file encoding is UTF-8 and \usepackage[utf8]{inputenc} is not included in the preamble like in the example just above. Here's a document that witness it; save it as UTF-8 and compile: 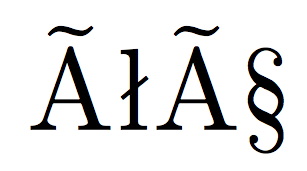 Load both packages, if you intend to use accented letters. And, possibly, switch to UTF-8. You'll be ready for XeLaTeX and LuaLaTeX, if you want to try them.

Not the answer you're looking for? Browse other questions tagged accents input-encodings or ask your own question.