Suppose that I have two path:

why their intersection are not filled with red color?

I think it's due to the precision of MetaPost too low, how to fix it?

It works here if I change slightly the definition of pat3, making pat3 start at the "left" (so to speak) of the circle and not at the "right" (to the contrary of pat0). For this, I defined another vardef macro (randomcirc_bis) 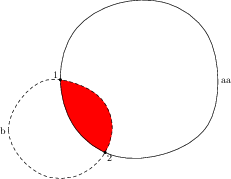 In this drawing I tried to reproduce exactly the modus operandi of buildcycle as explained in the MetaPost manual, p. 30 (section 9.1, "Building Cycles"). Citation:

Similarly point 2 is b intersectiopoint aa, and it is also the first intersection that b (pat3) encounters with aa (pat0).

I hope I have not been too confusing: English is not my native language…

The plain.mp implementation of buildcycle fails to find the correct overlap between two cyclic paths if the beginning (point 0) of one of the paths lies inside the other path. For example:

In each subfigure, the arrow head is pointing at the beginning of the path. You can see that buildcycle only works in situation 2 where neither point 0 lies within the other cyclic path. Note that in situation 4 we get the union of the two paths.

Here's a way to correct this fault. First you need a function to determine whether a given point lies within a cyclic path. Following Sedgewick's Algorirthms in C, you can write:

And here is an overlap function that replaces buildcycle in this special case of two overlapping cyclic paths.

The basic idea is that if neither point 0 is inside the other path, then you just call buildcycle, otherwise you split the two cycles up into an appropriate sequence of half cycles. Replacing buildcycle in the above example with overlap gives this:

And replacing buildcycle in the OP example with overlap gives this: 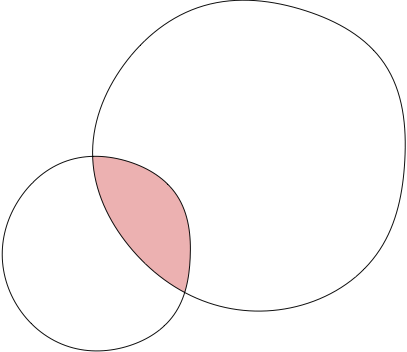 which is probably closer to what was wanted in the first place.

Furthermore, if the two cyclic paths are running in opposite directions the behaviour of buildcycle is different again. Here's an extended version of the first example; in the second row, the larger path is running backwards:

To deal with this possibility you can make overlap more robust by using the useful counterclockwise function (from plain.mp) which returns a copy of a cyclic path running counterclockwise. Here is the improved version of the overlap function.

which produces this in my extended example.

Here is another implementation of the same idea as in fpast's answer. Instead of starting with a point on the left, you can just rotate the original circle by 180 degrees. (I also simplified the code for randomized circle a bit). 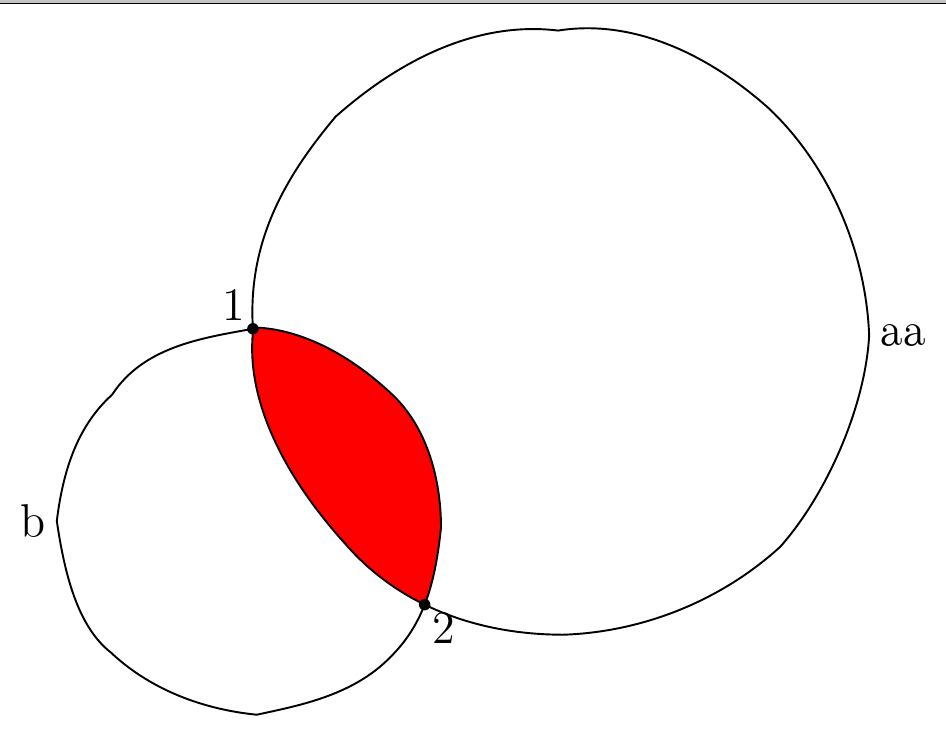 20
Generate all 16 possible 2-variable shaded Venn diagrams in TikZ?
9
Draw ellipses with different coloring for their intersection in tikz?
6
How to draw four squares arranged as in the following figure
7
How to paint the circular sector?
6
Color Mickey with hatching (Metapost)
4
MetaPost: My code with buildcycle doesn't have the correct output and nothing changes