What is the scheme of fonts naming in PDFs generated by LaTeX and other software?

Most of PDF viewing software allows one to see documents properties, in particular, fonts used in them. Some viewers (e.g. Okular of KDE) even allow to extract such fonts to TTF files. I always wondered why names of fonts are often so weird - they contain prefixes. This holds for PDFs produced by PDFLaTeX, XeLateX, MS Word etc. Googling this subject reveals only information about font embedding, which is irrelevant to font naming.

Below is a screenshot of a document properties window of Foxit Reader. Note that "EAPEGA+", "EAPHMM+" etc prefixes that some fonts have. 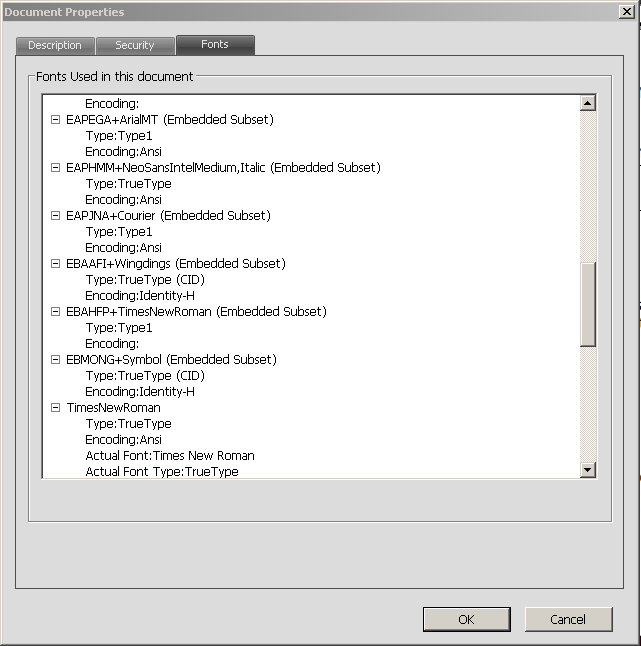 EDIT: this thread partly answers to my second question: one can try to uncompress a PDF, then use find-and-replace to substitute font name string, and repack everything back to PDF.

The prefixes indicate – as @cfr has already pointed out in the comments (and also in her almost synchronous answer) – that the respective font is embedded only as a subset, ie. that only those glyphs are included that are actually used in the document. These prefixes are meant to prevent clashes between different subsets of the same font, and to allow merging them.

The standard that the PDF-producing application has to follow is Adobe's PDF spec, which says (in section 9.6.4, PDF 1.7):

For a font subset, the PostScript name of the font—the value of the font’s BaseFont entry and the font descriptor’s FontName entry— shall begin with a tag followed by a plus sign (+). The tag shall consist of exactly six uppercase letters; the choice of letters is arbitrary, but different subsets in the same PDF file shall have different tags.

The naming scheme is hard-coded in pdftex, so there is no way to change the font names, other than editing the PDF file itself, which is always quite risky. Also, many viewers (among them, Adobe Reader) will not display the prefix at all.

A final remark regarding microtype, as @cfr brought it up: In contrast to the prefix with subsetting, font expansion lead to having a suffix added to the name of the font which was indeed included multiple times with earlier versions of pdftex. However, this is no longer the case (since pdftex version 1.20), and the size increase of the PDF file with enabled font expansion is negligible.

I have no idea about question (2) but this is relevant to question (1) and too long for a comment, I think:

For a font subset, the PostScript name of the font—the value of the font’s BaseFont entry and the font descriptor’s FontName entry— shall begin with a tag followed by a plus sign (+). The tag shall consist of exactly six uppercase letters; the choice of letters is arbitrary, but different subsets in the same PDF file shall have different tags.

EXAMPLE EOODIA+Poetica is the name of a subset of Poetica®, a Type 1 font.

So what you are seeing is due to the embedding of subsets. Note that TimesNewRoman does not have the prefix because it is not embedded but is rather using a system font. (If you did not have this font installed, your PDF viewer would show an alternative value for Actual Font and/or Actual Font Type depending on what you did have available and how substitutions are configured on your system.)

Not the answer you're looking for? Browse other questions tagged fonts pdf naming or ask your own question.

12
Hide "real" font name in PDF
3
Can I reduce the number of embedded fonts?

25
Berry naming scheme list of LaTeX font families
8
Accessing latex fonts from other programs
5
pdflatex: Handling of fonts when including other pdfs
0
Sweave and R 3.1.0: no pdfs generated
3
PDFs are not printed with the correct fonts