I have this table and I would like to make two vertical lines thiker than the others. This turns out to be useful to visually divide the columns. Basically my table has 13 columns and I would like to turn 2 of them a bit thicker. I won't show the code for the table because it is really huge and not practical to paste it here. What I'm looking for is probably a keyword to make the vertical line thicker, without messing too much with this already messed-up table :-).

EDIT: I tried with the following command

But it creates some spacing between one column and the other. Trying to remove the first \tablecolsep solves the issue (that is no more spacing between the columns), but I get three errors: Package array Error: Illegal pream-token (2.2mm): 'c' used. this probably because I declare the column like this: |"{2.2mm} but it I do not declare the size it messes the whole table up, Missing number, treated as zero. on

and Illegal unit of measure (pt inserted). on the exact same output as the second error. Sorry if these are stupid mistakes but modifying the command shown doesn't lead me to success.

EDIT2: By using the "array" package and following what @egreg said, I get the following error: Package array Error: Illegal pream-token (2.2mm):c' used. This is probably because I define the columns like this (wherexis\newcolumntype{x}[1]{>{\centering\hspace{0pt}}b{#1}}`):

You could use the ! feature of array:

I wouldn't use " as a specifier, because it can conflict with babel. 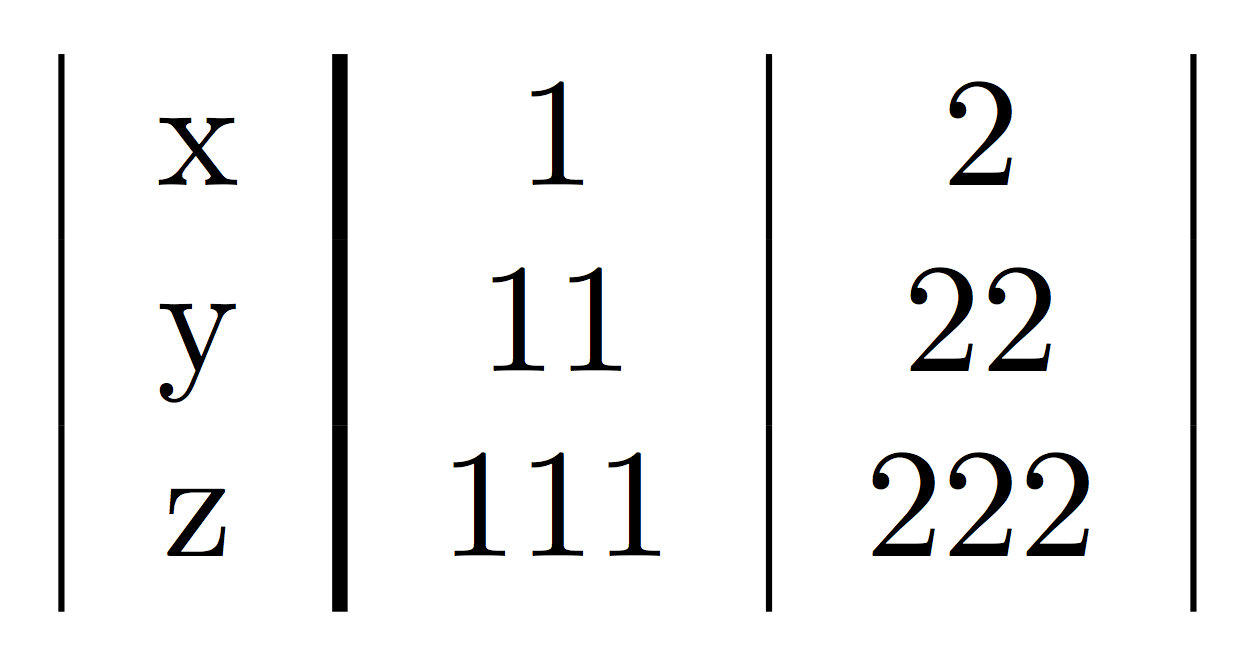 However, my advice is don't use vertical rules at all.

If you want to specify the thickness, change the code into

and then you can do

for having a thickess of 2mm.

Not the answer you're looking for? Browse other questions tagged tables or ask your own question.

55
How can I reproduce this table with thick lines?
4
How to remove unwanted horizontal line from diagbox
1
Longtable breaks when in a leftbar environment from the 'framed' package

2
Arrayjob vs array conflict
9
Border with multirow and multicolumn
10
tabular: thicker lines
2
How to correctly create a macro for a table?
0
LaTeX Error: Illegal characters in array with Dynamic OT table generator
0
Column dimension tabu
2
siunitx in tabularx
4
How to fix my table, centering of columns
1
! LaTeX Error: Illegal character in array arg