Multiple diacritics on one character

As linguistics student, I have to put more than one thing on a character every now and then. For example, I need to type ā̆. I thought I could simply do that by typing \={\u{a}}, but then the macron is placed above an empty space in front of the character.

How can I solve this? Thanks

I suggest you to use XeLaTeX with UTF-8 encoding and fontspec for direct character inputing. Charis SIL and Brill fonts are enhanced so as to handle diacritic stacking. SIL distributes an IPA keyboard which lets you enter diacritics or you can use the Characters Map in windows.

Here's a code sample with output. 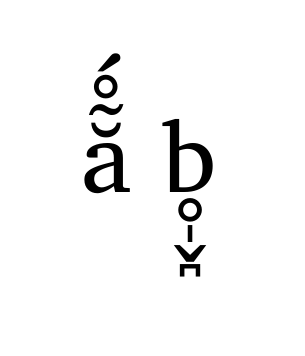 This is well suited for a stack. Here, I set a \={} atop a \u{a}, such that the baseline of the former is 0.4pt above the nominal baseline. You may tweak that value, as I have done in the second combination, if you want separation between the diacritics.

Other diacritic combinations pose no problem, using the same technique.

Here is a better solution, though not perfect: il you compile with xelatex or lualatex and load the fontspecpackage, you can "nest" the accents command. The only restriction is that the corresponding character does exist in the font. If it doesn't exist a workaround is to use the analog commands for accents in mathmode (e.g. \u for text mode becomes \breve in mathmode. As math letter are set in italic by default, you also have to use the \mathrmcommand – unless you want to use italic.

Below is a code that demonstrates all this: 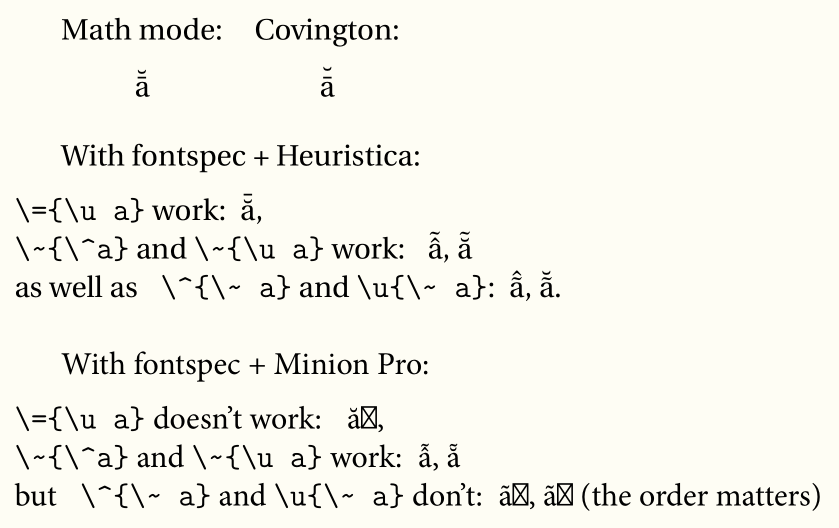 Using @Bernard’s hint, I checked the covington package, and its documentation says: “LATEX doesn’t give you a convenient way to put two accents on the same letter” and introduces some macros for the purpose. There are special macros for combining acute, grave, or circumflex with macron, and a more general macro twoacc for combining two accents, with a peculiar syntax: “its arguments are in square brackets, not curly brackets, and are separated by |. The ﬁrst argument is the upper accent (only) and the second argument is the letter with the lower accent indicated.” So in your case you could use, after

or have the accents differently nested with

This works, but especially the first one does not give a very impressive result (the diacritics are too far from each other):

(In Latin grammars and dictionaries, the latter form seems to be more common, when indicating that a vowel may be either long or short. And the result for it looks actually better than in my old Latin books.)

The package is from year 2001, so there might be better tools for the purpose now.

Not the answer you're looking for? Browse other questions tagged accents characters linguistics or ask your own question.