What does a double ampersand (&&) mean in LaTeX?

I've seen several answers that use the double ampersand, but I can't figure out exactly what it does.

I tried this out: 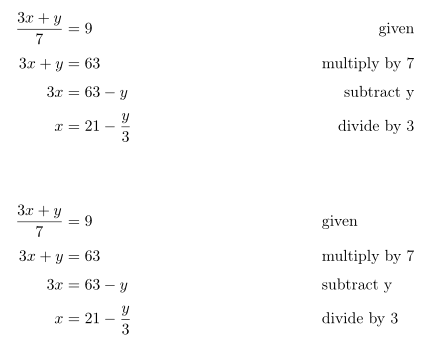 ...and it looks like the only difference is right vs. left justification. But when I throw in this:

that goes out the window. What exactly does && do in LaTeX? Why does having a single && in a row make the last column left justified, but having two &&'s make it right justified? How do & and && differ?

An align is a table-like structure, and & is a column separator. The thing is that the columns in an align are rlrlrlrlrl..., that is, every other column is right aligned and left aligned.

the a is in a right aligned column, while =b is left aligned. When you do

text will be in a right aligned column, but if you do

text will be in a left aligned column, as you basically just add an empty column between =b and text.

Finally, as egreg points out in his answer and tohecz in his comment, note that amsmath will insert some stretchable space between each rl column pair, to distribute them across the width of the text block. This causes the effect seen in your last example.

Needed to say (an that's something the other answers miss a bit), && is nothing more and nothing less then & <no code here> &, i.e., it is just two tab column alignment points &s in a row.

In general, & is the cell separator in tabulars and similar constructions. TeX computes the column widths dynamically, although it's possible to fix a column width. A double & has no special meaning: a single & means “go to the next cell of the alignment”, so && means “the next cell is empty, go to the following one”.

A generic tabular should be thought as a set of cells organized by rows and columns; the alignment is determined column by column (but can be overridden for single cells, in some cases).

The most common alignments are obtained with tabular or array (the difference is that the latter must go in math mode and the cells are typeset as math formulas). In tabular one must specify the column alignments, with input such as

which means “three columns, one right aligned, one centered, one left aligned”. Actually this adds some space next on either side of each column, so really we're specifying

The space is fixed (\tabcolsep), but this can be modified in various ways.

With align the same idea applies, but the number of columns is unspecified; rather the pattern

is repeated as much as necessary. The <dynamic space> is not added at the end. So an input such as

which has a maximum of three & in the rows, builds an alignment according to the scheme

No space is added between the r and the l column in each pair (but special precautions are taken so that the = is correctly spaced.

An empty cell is reserved no space; for each column, the widest cell determines the reserved space; so in that alignment the third column occupies no space because all the cells in it are empty.

The “dynamic space” is determined based on the width of the columns, so as to avoid overfull lines as much as possible.

In your third example, the cells starting with = belong to the third column, while the \text{...} ones are in the fifth: the alignment is (in abbreviated form)

where the second, fourth and sixth columns all have empty cells.

Inside align the first & usually comes before the sign and the other & is to change the column.

Not the answer you're looking for? Browse other questions tagged align columns ampersand or ask your own question.

41
Adding line by line comments to math proofs
5
Align works well everywhere but at plus sign
6
Weird spacing in aligned environment
11
Problems with alignment of sequences
6
How to do the linear program in format
5
Why does horizontal space after ampersand becomes less?
6
Split equation using alignat*
6
Trying to align the equations and labelling
6
Center align* columns in math mode
3
Why is the align* environment making such a big space?
See more linked questions

14
How do I left and right justify text within an align environment
19
What does ampersand equals mean?
11
Left aligning equations without align character
4
Horizontal alignment of equation and text
3
Proper left alignment in math environment
0
Double equation alignment problem within align enviroment
1
A case of disappearing spaces
3
How can I align this equation in the center?