What are the options that can be considered an alternative to the old asterism (⁂) symbol ?

I would like to denote a small break in the flow of the text, I noticed that this days many people like to just add more whitespace than the usual new line; but still, I would like to use a symbol, a more explicit glyph and I don't know if there are more "modern" ways to express this.

Fleurons could be an alternative; the pgfornament package can be used in this case: 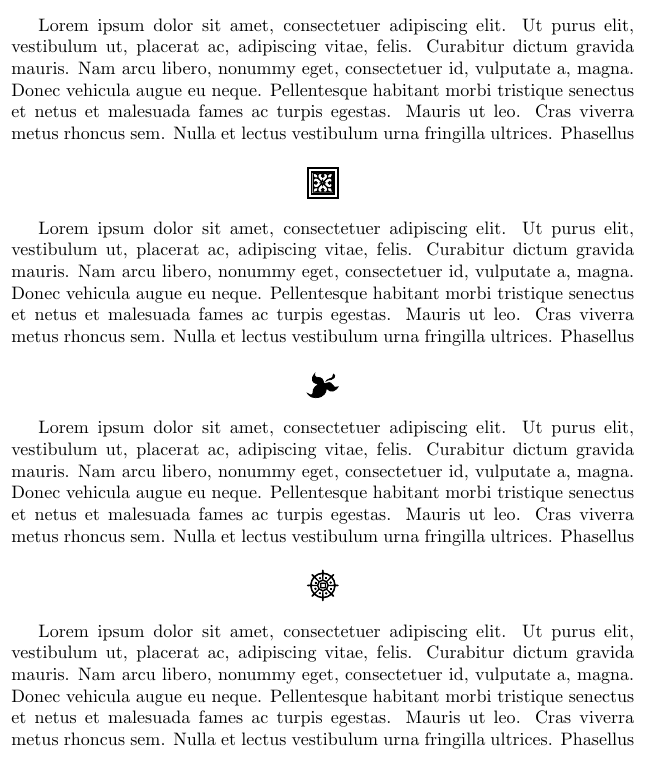 The Web-O-Mints fonts offer another set of glyphs that could be used: 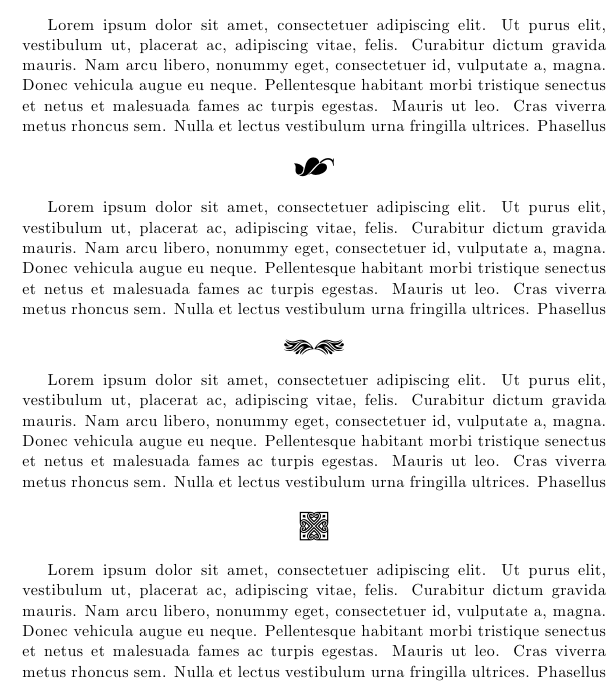 If you decide to stay with the asterism, here is a homemade version. 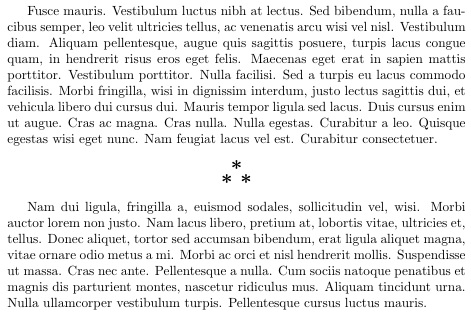 This is the solution noted in the Comprehensive LaTeX Symbol List (p. 104 in the A4-format PDF):

Sometimes an ordinary tabular environment can be co-opted into juxtaposing existing symbols into a new symbol. Consider the following definition of \asterism ... from a June 2007 post to comp.text.tex by Peter Flynn:

Note how the space between columns (\tabcolsep) and rows (\[. . . ]) is made negative to squeeze the asterisks closer together.

This code provides a command \asterism which produces the following symbol with the default LaTeX fonts (at the greatest magnification my viewer will allow):

What I used when I needed this (and had never even heard of an asterism) was to use a solution similar to Gonzalo Medina's but without the need for pgfornaments (which I'd also never heard of and which might not have been written): 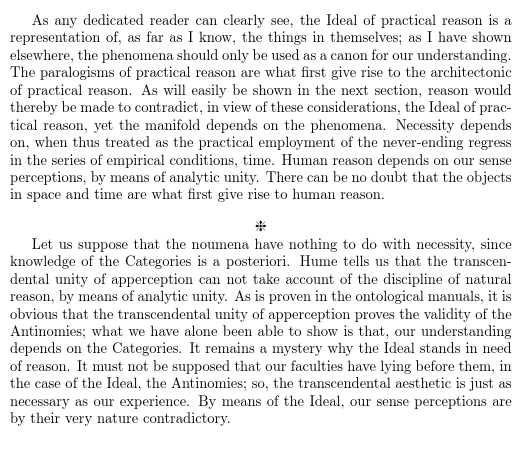 What I liked about this symbol was that it was relatively unobtrusive and did not distract from the text. It did just enough to delineate the end of the description of one thing and the beginning of the next, without detracting from the focus on those descriptions.

Obviously you could substitute a different character or a symbol from an entirely different font, thus providing a great many variations to produce more-or-less decorative effects and more-or-less stringent breaks.

I would say this: it would be very easy to go over the top with this kind of thing. I really think 'less is more' in this kind of case. The typography should draw attention to the text and not away from it. (Ideally, the reader should not really notice the typography at all.)

Not the answer you're looking for? Browse other questions tagged line-breaking or ask your own question.

10
Placing a decorative separator in text
1
How to use an asterism to separate sections?
167
Totally sweet horizontal rules in LaTeX
24
End of paragraph with ornament
30
The correct way to perform a section break in LaTeX
25
Paragraph breaks with asterisks
15
PRL style horizontal line in Latex
8
Formatting a book with scene markers
2
Which symbol to put between paragraphs?
0
Best Way to Produce This Chapter Divider Image
See more linked questions

9
How to force line breaks within a fancyvrb verbatim environment?
25
Difference between control space and non-breaking space
6
automatic \allowbreak around mathbin and mathrel characters
3
biblatex and new line for Title, and all entries in general
1
How can I keep everything within a variable/macro on the same line?
2
Breaking long formula at specific characters
2
A \par[] version of \linebreak[]
0
Automatically making spaces (preferably also hyphens) after 3-or-less-chars words non-breaking