How to redefine the section symbol (§)?

I'm trying to redefine the section symbol (§) so that it automatically places a space after it. When inserting the symbol in text, I typically write \S{} Section Number which gets me the spacing between the § and the Section Number that I'm after. Since I do this every single time I figured I'd just redefine the command.

Here is my attempt:

Unfortunately, it doesn't seem that I've changed the behavior of \S at all--- both \S and \OldS seem to behave identically.

Why doesn't my attempt produce the desired space between \S and the following text and how can I fix it?

The command \S is defined with \DeclareRobustCommand, so redefining it with \renewcommand is not the best strategy, see When to use \LetLtxMacro?

If you really want a space after \S (which is not usual, I should say), it's better to act at a lower level.

The kernel definition of \S is

so a better strategy would be

You surely don't want a line break after §, do you? So ~ is necessary. Using \xspace doesn't guarantee that a line break is not taken at the space.

an \S command that ends up in a caption or other moving argument will result in two spaces. Why?

When LaTeX writes in the .aux file a command \S 1 appearing in a figure caption, it will write

because the expansion of \OldS is still \protect\S. The same would be written out in the .lof file. When the .lof file is read in, \protect will be ignored, and \S will be interpreted normally as \OldS\; this means two spaces, because the following \ would still be there.

reserving \S for the cases where you don't want a space (I can't see when, though).

However, I believe that the simplest way is to type

How about using the xspace package:

The advantage is that if you ever want to typeset \S before a full stop or comma, xspace automatically omits the additional space. 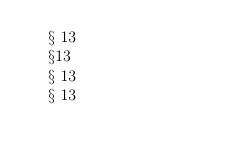 176
Drawbacks of xspace
42
No space following macro without argument
89
When to use \LetLtxMacro?

57
A centered plus-minus symbol
10
Creating a symbol that combines a number with a triangle for math-mode
7
Make < behave like \langle
5
Redefine mathematical symbols in size
11
Spacing between two relational symbols
1
Pandoc \Diamond Symbol Not Working With Subscript
4
How can I change a math symbol's size globally?