Why does \text only affect next charater, but \cal affects all that follow

I am sure this is indicative of a more general idea, but I noticed that if I put in

to my tex and compile I get the following output 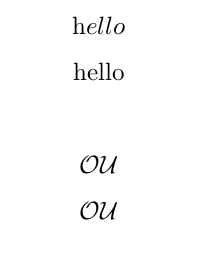 Clearly in the first case the \text command has only affected the first character unless braces are used, whereas in the other case all charcters are affected.

Is there a reason as to why these behave differently? Is there a general rule as to which commands will act which way?

Thanks for any help in advance. Also, I am not sure which tag to use - please do add anything relevant.

This difference in behavior has been taken into account almost twenty years ago, when LaTeX2e was released (later simply called LaTeX).

The command \cal has been deprecated since June 1994, and \mathcal is to be preferred. Like \text, \mathcal is a command with an argument and its effect holds only for the material in braces that follows it.

is valid and supported input. By rule of TeX, if a command with argument is not followed by {, the first token is used as the argument. This is why the manual insists that arguments should always be enclosed in braces.

Notice also that $$ is not to be used in LaTeX. The manual doesn't mention it; people use it, but they're wrong.

19
Why does a color meant for the first typeset line *only* (with package magaz) affect the *entire* document?
5
What happens to fonts (and robust commands) in shipout?
3
Why does mhchem italicize macro text?
16
Why not scale elements that contain text
4
DeclareMathOperator does not respect math font
0
Creating custom font commands which behave like LaTeX size commands