Command that changes its definition the nth time it's used

I need a command to behave differently the first time than the next times it's called. Right now I use \newcommand\foo{First\gdef\foo{Next}}, that is, it redefines itself the first time.

Moreover, I need to “reset” its meaning at some point, so I define \newcommand\resetfoo{\gdef\foo{First\gdef\foo{Next}}}.

But this seems to me rather difficult. May be there is an usual way of doing this, but I'm not aware of it (also, I know almost nothing about expansion). Which is the correct way of solving this kind of problem?

As the question states, I need a more general way: some function to change its definition in its n th “expansion” (I'm not sure I'm using the word in the right place). How would you solve this problem? I also need the necessary \resetfoo.

In case it's not already done in some way, my idea is to have some command \changedefinitionafter\foo{3}{OneTwoThree}{Next} or something like that. expl3 solution is also welcome.

Here is a more general MWE.

Also, tags and suggestions for the title of the question are welcome.

Have a look at the following example:

I love using counters! Here only the expansion after the number specified in \changedefinitionafter is modified. 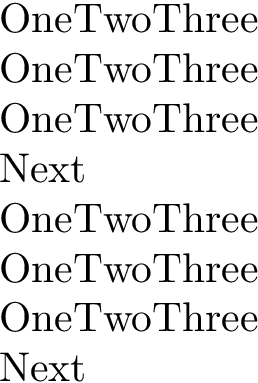 No counter, but three macros for each command of this type:

Be aware that using such commands in moving arguments will fail for several reasons.

Not the answer you're looking for? Browse other questions tagged counters expansion expl3 or ask your own question.

7
How do I examine a token?
27
Can one define an expandable command that removes control sequences from its argument?
8
Is there a way of defining a command \nullifyifmoved{arg} that will normally act like its argument but act like a no-op if the macro is "moved"?
7
Understanding token expansion
3
\ensuremath expansion fitting context
5
How can recursive editing of a comma-separated list be handled in expl3?
1
LaTeX3 expand token list in sequence
5
Store unknown key in l3keys
6
What are the values for parameters of an \edef at the time of definition?
8
How to safely check by means of expansion-methods whether a list of tokens contains a token which is defined in terms of \outer?