I'm currently working with modelchecking of symbolic dependecy graphs for my semester project in Computer Science, and am dire need of an easy way to draw dependency graphs preferably using TikZ.

My problem is somewhat related to this, but i need the arcs to be directed.

A hyperedge e is a tuple e = (v, T) where v is a source node and T is the target set. Each element in T is a tuple t = (w, t) where w is either a non-negative integer or a parameter and t is a target node.

The follwing example (found here) does exactly what i need, except i need the arcs to be directed.

I tried adding -> as an option to the tikzpicture, but this resulted in arrows not just to the target set but also to the source node.

which will add arrows to two of the edges, those leading to the target nodes. 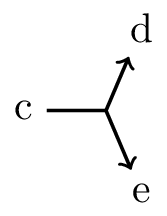 Not the answer you're looking for? Browse other questions tagged tikz-pgf graphs or ask your own question.

13
Rotate a node but not its content: the case of the ellipse decoration
17
How to define the default vertical distance between nodes?
3
Bent paths via relative point from node to node
17
TikZ: Drawing an arc from an intersection to an intersection
9
Line up nested tikz enviroments or how to get rid of them
6
Problems with nested TikZpictures
1
Graph with parallel multi-edges with designated anchor points