position of the slash in hatted \slashed

So I want to denote the Dirac operator with a hat, and I tried both \hat{\slashed{D}} and \slashed{\hat{D}}: the first one has the $^$ rather distant to the $\slashed{D}$, while the second one has the slash much too to the left of the $D$, almost coincide the semi-vertical stroke of the letter $D$.

Is there any way to adjust the position of the hat or slash?

Just overlap the symbol with the hat with the slashed version of itself.

You can use \phantom in the following way to prevent double striking the glyph, but AFAIK \phantom doesn't detect cramped style and shifts the hat to the right.

I define a command \pslashed that mimicks \slashed, but over a phantom.

Why doesn't \hat{\phantom{D}} give a good result? Because \hat cannot get the font metric information about the character D, because it's over a box containing nothing. So we set the accented character (in \mathrlap) and then set the slash as if it were across a D. 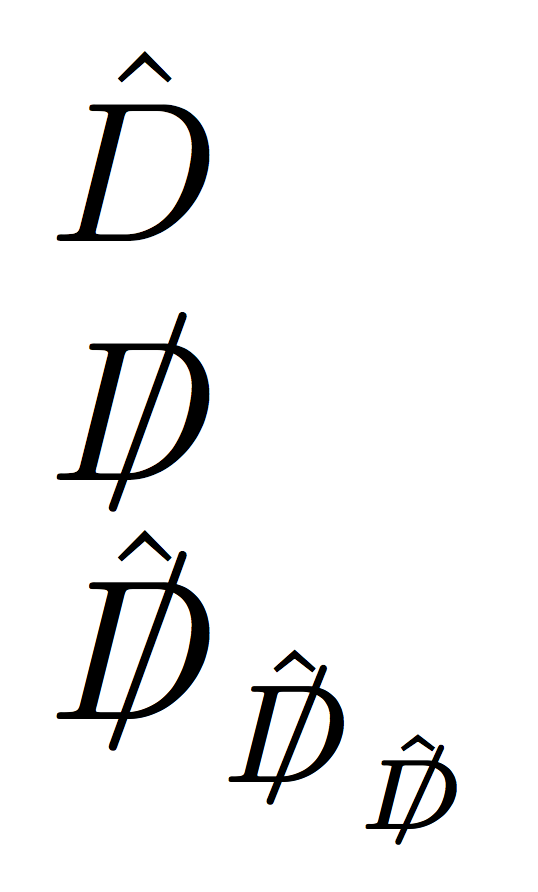 This turned out a lot more interesting as an exercise, than I anticipated. In the first row of my answer, I give the basic elements we are working with, the D, the hatted D, and the slashed D.

Then, on the second line, I confirm the OP's observations that creating composite glyphs \hat{\slashed{D}} and \slashed{\hat D} cause distortions in the result. That's not too surprising, I guess.

So I figured this was tailor-made for a stack, wherein I could superimpose two of the basic elements atop each other to achieve the result. I first confirmed that the basic elements were all the same width, not augmented laterally in some way by the decoration. Of course, I wanted to avoid, if possible, double-striking the letter D, so I used a \phantom of D in one of the two elements of the stack. And I found, very surprisingly to myself, that the phantom distorted the results, as well.

About this time, Henri posted his solution, far superior to my own approach, since it naturally scales with mathstyle (whereas I would have to add the apparatus of scalerel on top of my solution to achieve that). I abandoned my solution, voted for Henri, and left him a comment of my \phantom observation. But then he asked for the stackengine result, so I continue.

So, on the fourth line, I just lived with the double-striked D, same as Henri. But, this approach does not, in its current form, scale with the mathstyle.

Not the answer you're looking for? Browse other questions tagged symbols positioning stacking-symbols or ask your own question.

17
How do I lower the \widetilde accent, i.e., move it closer to the variable?
3
Text on the left, figure on the right
11
How to get an exponent hat
9
What is the cleanest way to adjust the dimensions (height, depth, width to the left and right) of a symbol?
1
Node position in decision tree with TikZ
12
How to position vertically more letters according to alphabetical order in the margin of the page?
8
Positioning includegraphics vertically on a line?
2
Table Formatting with and without threeparttable
2
Get rid of useless space between a symbol and a following superscript \top
0
Placement of quotation or epigraph