Consistent macro for bold upright vectors in both latin and greek

I’m using pdfLaTeX, and I want all vectors I typeset to be in bold, upright font. Unfortunately, based on whether the symbol is latin, lowercase greek, or uppercase greek, there are different commands necessary to make it bold and upright. I’d like to be able to define a single macro — say, \vector — such that it does what I want no matter the argument and I don’t have to think about it:

This popular question deals with some of this issue, but the solutions there still have the lowercase greek vectors in bold italic, not bold upright. Plenty of other questions touch on this issue in various ways, but I haven't been able to find a definitive answer to this exact variant. Perhaps the answer is “you can’t” — but I haven't seen that definitively either.

A modification of my answer to Automatically check if a math character is greek or latin should do: 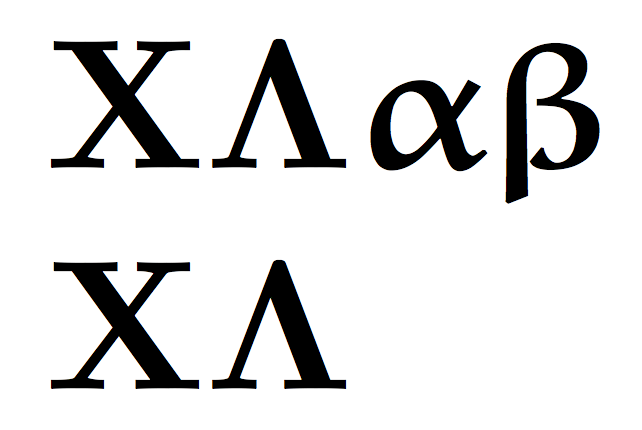 What does \commexo_makeboldupright:n do? It takes its input, say \alpha, strips away the backslash from the name with \cs_to_str:N and builds the control sequence \upalpha via \use:c: saying \use:c{upalpha} is equivalent to typing \upalpha.

As it may be of benefit to others, I will mention the solution I currently use: In a document with a lot of greek vectors, I switch the document font from Computer Modern to Charter and use the isomath package, such that \mathbf works as expected on greek characters: 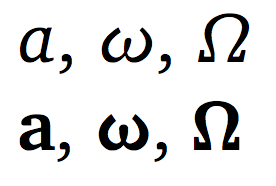 I posted the question because I prefer Computer Modern to Charter, but since apparently the solution in Computer Modern is at the very least quite complicated, perhaps someone else may find this comparatively simpler solution useful.

Not the answer you're looking for? Browse other questions tagged bold greek vector roman or ask your own question.

65
Bold math: Automatic choice between \mathbf and \boldsymbol for Latin and Greek symbols?
57
Which "bold" style is recommended for matrix notation?
15
How to switch to upright greek in math mode?
8
Automatically check if a math character is greek or latin