How to use multiple sets of numbered appendices with bookmarks and the memoir documentclass?

To have a memoir document with several chapters with the running story, a set of appendices called Appendices, with additional data in the main document, and a second set of appendices called Attachments, with additional maps etc that are provided separately, with only a small description of the attachment in the main document. Preferably the Appendices are numbered with \Alph (by default), and the Attachments numbered with \Roman.

Redefining the \appendix[|toc|page]name commands is no problem, and either a second \appendix or a \setcounter{chapter}{0} restarts numbering, and \renewcommand{\thechapter}{\Roman{chapter}} works fine to update the titles. However, bookmarks adds the page anchors as Appendix.[A|B|C|...], for both the Appendices and Attachments, and thus complains

destination with the same identifier (name{appendix.A}) has been already used, duplicate ignored

How can I either rename the identifier prefix to attachment, or the change identifier numbering to Roman numerals such that the bookmarks in the TOC are correct?

A workaround to get correct bookmarks in the TOC is to move the \backmatter command before the Attachments. However, this disables numbering altogether, and I do need them. Also this only works if there are two sets of appendices, but perhaps someone else might need three or four sets of appendices, and then this does not work anymore.

The workaround is to add the line

Hchapter is the counter used internally by hyperref (loaded by bookmark) corresponding to chapter. 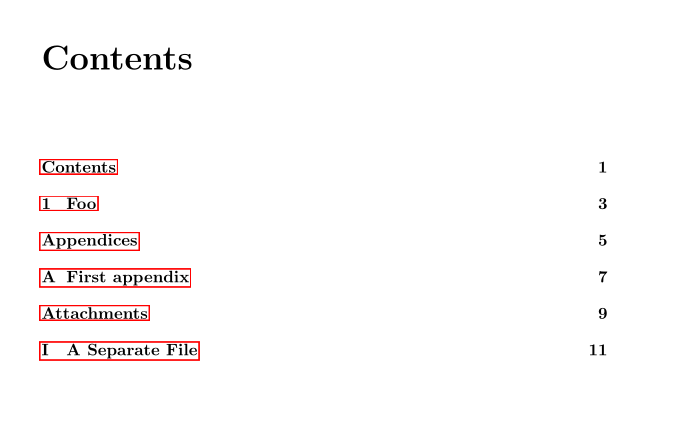 If you now click on " I A Separate File" you will get to the right chapter.

or loading bookmark and passing that option to hyperref:

This answer is heavily inspired by karlkoeller's answer, but takes a more flexible and robust approach, IMHO.

works most of the time, but is not entirely foolproof either. Suppose I have a large document with nine or more Appendices, then the first Attachment will clash with Appendix 9 because both have number I.

To fix this we can prepend \theHchapter with a unique string such that all sets of appendices are numbered independently. Since I didn't like the big bunch of \renewcommands at the start of a new set I decided to wrap it all up in a single macro. This can probably be optimized even further, see below for a small list.

The advantage is that you could also group your appendices with the same numbering within each group (such as A1, A2, A3, B1, B2. B3, or AA, AB, AC), without worrying about clashing appendixnumbers.

Not the answer you're looking for? Browse other questions tagged sectioning memoir appendices bookmarks or ask your own question.