Package to load in Lyx to use \quad?

You don't need any additional packages to use \quad. If by 'not recognized' you mean that \quad doesn't have an effect, it may be because you've added it after a line break (Ctrl + Enter), where it won't work, as egreg mentioned in a comment. Instead, use \hspace*{1em} in an ERT, or do Insert --> Formatting --> Horizontal space, using a custom length and with Protect checked: 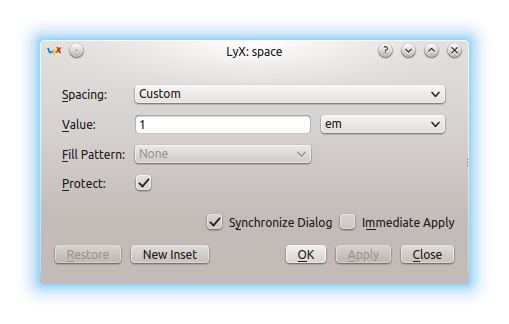 However, I don't think you'd really want to use \quad, or similar manual spacing, to write algorithms, it would be better to use one of the several existing LaTeX packages for that purpose.

See Werner's answer at https://tex.stackexchange.com/a/64354/586 for an example. To use this in LyX, go first to Document --> Settings --> LaTeX preamble and add

In your document, add an ERT with Ctrl + L or Insert --> TeX code, and write the entire algorithm environment in this, e.g.

The ERT requirement is a drawback, but if you can get https://tex.stackexchange.com/a/115729/586 to work then that can be avoided.

Also, if you are content with letting your algorithms be floats (similar to figures and tables), you can modify the above example a little. First, remove \usepackage{algorithm} from the preamble. Add an algorithm float with Insert --> Float --> Algorithm. This adds the caption box automatically, and you can add the label as normal. Insert an ERT after the caption, and write the algorithmic environment in this, i.e. just

Not the answer you're looking for? Browse other questions tagged spacing lyx or ask your own question.

284
Lengths and when to use them
12
Which package to use for writing algorithms?
8
Use algorithmic in LyX

14
LyX: How to add command line option/flag for latex compiling?
4
Option clash for package inputenc when using Lyx with LaTeX class that already uses inputenc
4
Using braket package with Lyx with WYSIWYG
2
xymatrix using lyx
3
How do I prevent LyX from loading fontspec automatically?
7
enumitem.sty not found
0
How can I get LyX to compile child documents selectively?
2
Inserting code before Lyx generated preamble