Why does \usepackage[british]{babel} hyphenate the word "alternate" incorrectly?

Now I know there are hyphenation differences between British and American English but in no dictionary, British or American, could I find the word "alternate" to be broken down to al·tern·ate instead of al·ter·nate (for example). And yet:

If you remove the babel line or change it to american, the hyphenation will be correct:

So how does the British hyphenation work? Is it a complete reimplementation that can be buggy? Or is it just a list of exceptions where British syllabification differs from American? If it is the latter, why would a wrong hyphenation of "alternate" be made part of that word list?

The pattern for British English were prepared in 1996 by Dominik Wujastik using a list of hyphenated words made available by Oxford University Press and is present on CTAN as ukhyph.tex. In 2008, the team in charge of maintaining hyphenation patterns for TeX Live made a reorganization of the material; here's the start of hyph-en-gb.tex:

Some lines later we can read

so I argue that the hyphenation patterns have never changed from 1996, except for the addition of a hyphenation exception list that reads, in the original file,

and is exactly the same in the reorganized files.

It is true that alternate hyphenates as

as the following file to be run with pdflatex shows:

Hyphenation in TeX doesn't examine a long list of words, but rather uses a method based on patterns, described in Appendix H of the TeXbook. The patgen program distills a set of patterns based on a list of hyphenated words, but some compromise has to be made for efficiency of the algorithm, so it's surely possible that some word slips off and turns out to be hyphenated incorrectly.

That's what the hyphenation exception list is for. You can, until the problem is fixed by adding some suitable patterns or the word in the exception list, add it manually:

The command \babelhyphenation requires babel version 3.9; for an earlier version one can use

which has the same effect.

this answer will not be as elaborate as the one by egreg, but i have some different information.

essentially everything egreg says is correct, but the clue may lie in exactly which oxford dictionary was the basis for the list of hyphenated words that dominik used.

i have just come into possession of a copy of the dictionary that was purportedly used: "the oxford minidictionary of spelling and word division". in it, the word in question is presented as

where the period represents a broken vertical, a "less recommended" place for division.

i agree that i don't find this "attractive", and certainly would question it, but then, i'm from the left side of the pond. (i was offered this dictionary as an aid to my editing of tugboat; since i aim for consistency of style -- either british or u.s. -- i gratefully accepted. i admit to surprise in many instances looking through it, but as i said, i'm from the western side of the atlantic.)

edit: here is a scan of the relevant page of the cited dictionary. in no word beginning "altern" is there a hyphen after the "r"; if there is a hyphen, it's always after the "n" (which i don't understand), but in the case of "alternation", that location is avoided completely, with the primary hyphenation point before the "-tion". a true puzzlement. 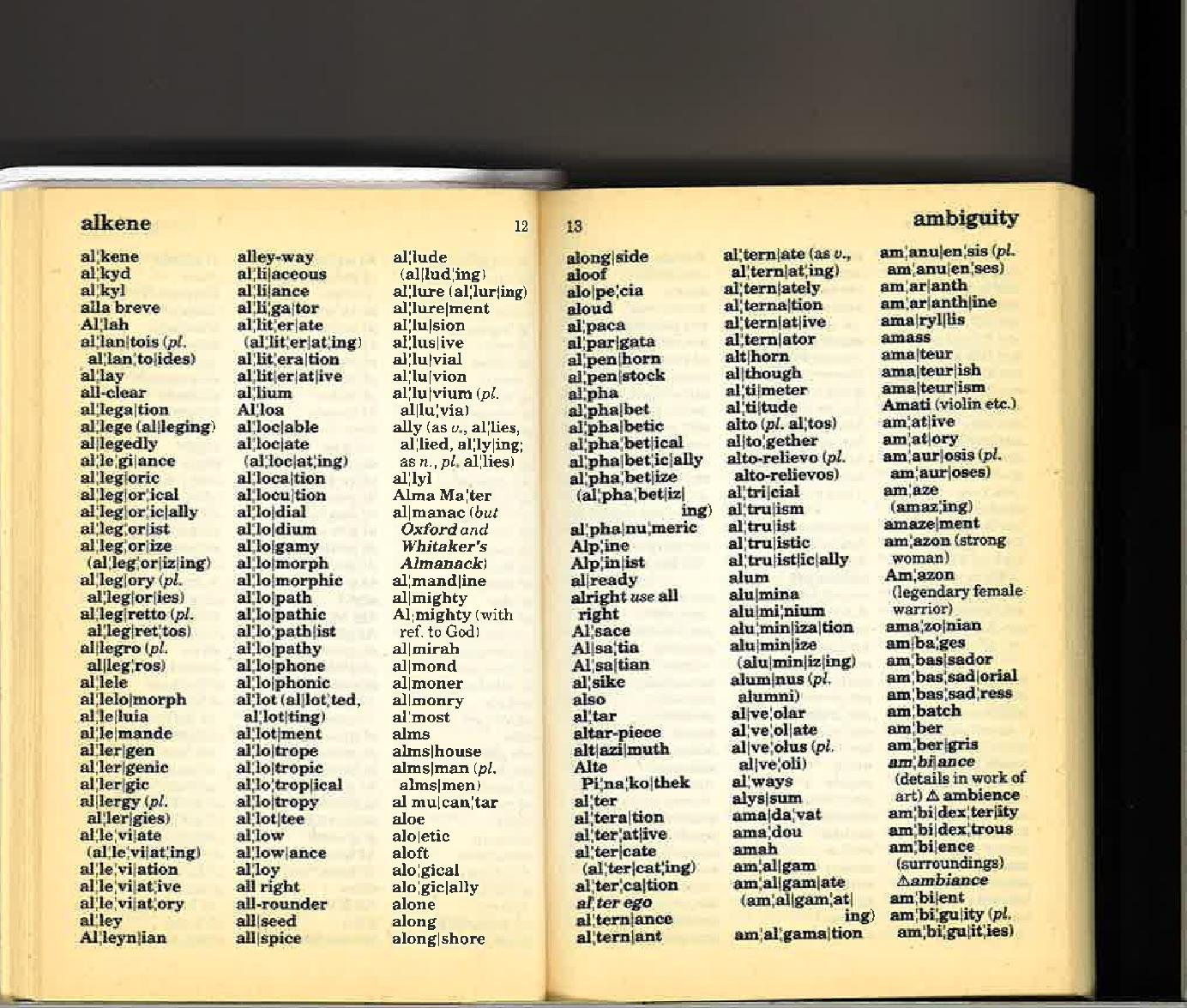 note: this image is from "the oxford minidictionary of spelling and word division", copyright by oxford university press, 1986, from a 1992 reprint. (i have neither requested nor received permission for this use.)

Update:
After discussion with a native British speaker, I was coerced into searching for an audio example of the pronunciation. I found a useful example at https://dictionary.cambridge.org/us/pronunciation/english/alternate which gives three forms (verb, adjective, and noun) in both UK and US pronunciations. The UK adjective is pronounced in this example with the stress on the second syllable. But so is the US adjective -- which is just plain wrong in my experience. (The pronunciation given for the US noun is also not what I learned, in any US regional variation.) So I concede that the UK pronunciation of the adjective may differ in the way that makes the hyphenation "al-tern-ate" appropriate. However, since the spelling of the three grammatical forms is uniform, this difference in hyphenation means that the word should be omitted entirely from resolution by the patterns, since no automatic grammatical distinction is possible. A conundrum.

Apologies for reviving this thread, but I didn't see this answer in here. I believe al-ter-nate and al-tern-ate to be two different words.

They are pronounced differently, in the same way the word ate (as in to eat) is pronounced, and based on that it makes sense to hyphenate them in two different ways.

I believe I can perhaps add a touch of clarity to this discussion. Fowler's Modern English Usage, a standard style guide for [British] English published by the Oxford University Press, is likely to have been the source that informed the hyphenation practice. Fowler says of hyphenation that:

The problems of hyphenation at the line-end are compounded in newspapers by the narrowness of the columns and the customary assumption in most printing that the right-hand margin, like the left-hand one, should be straight (or 'justified'). Who has not encountered bad end-of-line breaks like c-/hanging, mans-/laughter, rear-/ranged? [...]

It is usually best to divide a word after a vowel, taking over the following constant to the next line. In pres. pples take over -ing, e.g., divid-/ing, sound-/ing; but chuck-/ling, trick-/ling, and similar words. Generally, when two consonants or vowels come together one should divide between them, e.g. splen-/dour, appreci-/ate. Terminations such as -cian, -sion, and -tion should not be divided when forming one sound: divide as Gre-/cian, ascen-/sion, subtrac-/tion. Hyphened words should be divded at the hyphen, and indictionaries a second hyphen may be used to clarify their spelling. This is not the end of the story: Ronald McIntosh lists thirty-three rules altogether for dividing words at the line-end. [...]

[...] McIntosh warns us that American practice is likely to become more influential in British English as more and more technology for word-setting becomes imported across the atlantic. We have been warned. [!]

It therefore seems entirely plausible that Babel's rules for British English hyphenation do indeed differ slightly, based on the rules above, before the etymology of each word in preference to their perceived pronunciation.

Then I checked that against two web pages:

Since Libre Office is also using hunspell, I have tested in it and got the same as babel.

So this spelling is obviously used pretty widely.

All these hyphenations sound funny to me, but I am irrelevant as I am obviously not a native speaker. It would be nice to hear an opinion from a native British speaker though.

Hyphenating a word can occur at ANY syllable break. So "alternate" in syllables is al-ter-nate so it is acting correctly by putting the hyphen at these spots where it is closest to the end of the line. As you have shown it, it is working correctly.

Not the answer you're looking for? Browse other questions tagged babel hyphenation or ask your own question.

10
Write a class with language dependent strings
5
How to get hyphenation output?
5
Why is XeLaTeX Pushing British English Text into the Margins?
5
Babel fails to hyphenate when the word contains periods
18
The word "Wikipedia" does not hyphenate
2
Why does TeX hyphenate analysis as anal-ysis?
0
\hyphenation command not wokring, but manual hyphenation works (XeLaTeX) (Minimal example provided)