How to use i.e. left, middle and right color when using draw as an argument instead of a command?

Normally I can just use, say \draw command to just set an argument of [top color=#1,bottom color=#3, middle color=#2] to get the desired result, but in this case I want to use the draw within my tikzset to define fading colors in similar fashion.

I doubt there are any workarounds barring perhaps the shading command for which I have not found an argument equivalent (?) in the PGF manual v3.00, see page 694.

And the object itself:

Well yet another polar transformation hack. We are lucky since the path is circular so we can pull off this. For other curve shapes, it's quite more involved, if not impossible

Here, the x coordinate becomes the angle so by moving up and down we control the radius. By moving left and right we play with the rotation. I placed two nodes inside and outside the transformation scope. It is pleasing enough to fool around. Notice that the arrow tip is also distorted. 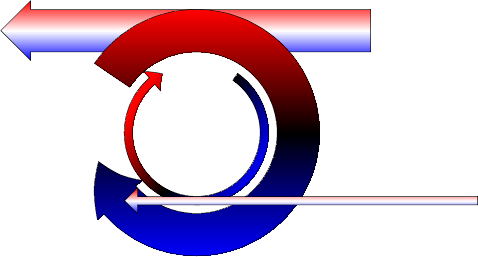 Not the answer you're looking for? Browse other questions tagged tikz-pgf shading or ask your own question.

35
Tikz: Shading a path without any filling
15
TikZ: shade also the border of a node
8
Fading a path in TikZ
3
How to align a “double arrow” with a tikz arc shape?

16
Numerical conditional within tikz keys?
2
Tikz overrides one of my defined colors when I use left color, middle color and right color, how to fix this?
4
Persistent draw color when using \def
6
Problems with nested TikZpictures
29
TikZ: When will I need to use edge and how does it differ from the conventional path draw command?
12
automatically connect horizontal same color lines
5
using linestyle and color of \tikzlastnode in append after command
6
Using predefined command or coordinate with \draw bend right
2
How to draw loop arrow and right left arrow
2
how to use the arc and shade function to draw an amazing cylinder shape