How can one make border of text for a figure?

This may be an odd request, but I'm curious if it is possible (or relatively easy since it's possible to hack together something). I have a feeling, if I actually want to do this, it will have to be through manually setting each side up.

One option using the text along path decoration from TikZ: 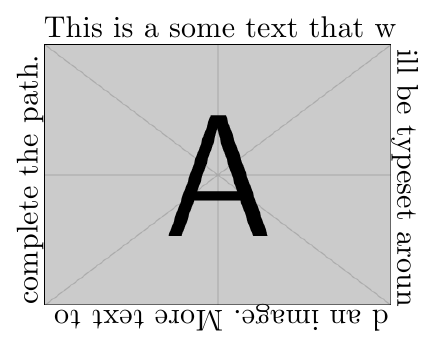 Some restrictions apply, though, as can be read in section 48.6 Text Decorations of the PGF manual:

pgf "does its best" to typeset the text, however you should note the following points:

• Each character in the text is typeset in a separate \hbox. This means that if you want fancy things like kerning or ligatures you will have to manually annotate the characters in the decoration text within a group, for example, W{\kern-1ptA}TER.

• Each character is positioned using the center of its baseline. To move the text vertically (relative to the path), the additional transform key should be used.

• No attempt is made to ensure characters do not overlap when the angle between segments is considerably less than 180◦ (this is tricky to do in TEX without a huge processing overhead). In general this should not be too much of a problem, but, once again, kerning can be used in most cases to overcome any undesirable effects.

• It is only possible to typeset text in math mode under considerable restrictions. Math mode is entered and exited using any character of category code 3 (e.g., in plain TeX this is $). Math subscripts and superscripts need to be contained within braces (e.g., {^y_i}) as do commands like \times or \cdot. However, even modestly complex mathematical typesetting is unlikely to be successful along a path (or even desirable).

• Some inaccuracies in positioning may be particularly apparent at input segment boundaries. This can (unfortunately) only be solved on a case-by-case basis by individually kerning the offending characters within a group.

Not the answer you're looking for? Browse other questions tagged floats text-manipulation or ask your own question.

21
Border or frame around figure
3
How to make overlaid text?
8
How can I force-move text?
2
One Command to Rule Both Colored Text and Invisible Text
9
How to put two labels for one figure
1
How can I ensure that a figure is displayed following another one?
2
How can I make “headings” inside a figure?
1
How to make figure align with text?
3
Trouble when using the subfiles and wrapfig packages together
3
Make text fall of a line